27 February 2013
Humanitarian operations to assist Syrians who have been affected by the ongoing conflict are currently operating on a “shoestring” budget and funds are urgently needed to keep up with the scale of the crisis, senior United Nations officials said today.

“This is a crisis that is completely stretching our capacity,” the Under-Secretary-General for Humanitarian Affairs and Emergency Relief Coordinator, Valerie Amos, told reporters after she briefed the Security Council behind closed doors. “The pace at which we are able to provide assistance is much slower than the pace that the crisis is evolving.”

Ms. Amos said the Office for the Coordination of Humanitarian Affairs (OCHA), which she heads, is still trying to gain access to many areas inside the country, as well as engaging with groups on the ground to ensure they can provide assistance across conflict lines. She noted that there had been recent successes in gaining access in the Homs and Aleppo governorates, but underlined that to ensure the continuation of aid, more funds are required.

Last month countries and regional organizations pledged more than $1.5 billion to provide humanitarian assistance to civilians affected by the conflict in Syria. However, Ms. Amos said that only $200 million has been received so far.

“We are engaged in consultations with the countries that pledged but we have not yet received $1.3 billion of the money that was pledged,” she said.

The Director of the New York office of the UN High Commissioner for Refugees (UNHCR), Udo Janz, echoed Ms. Amos’ remarks on the urgent need for funds to be able to sustain operations not just inside Syria but in neighbouring countries, which are now hosting some 900,000 people who have fled the conflict.

“The funding situation is a grim one. We have heard all the pledges, we now need to see that these pledges are honoured,” he said. “UNHCR is operating on a shoestring compared to the needs that are in the region.”

Mr. Janz said that during the his briefing to the Council, High Commissioner for Refugees António Guterres underlined the situation of Palestinian refugees who have been hosted in Syria for many years and have now been forced to leave their homes, with some 300,000 now in Lebanon. He added that it is vital that the UN Relief and Works Agency for Palestine Refugees in the Near East (UNRWA) receives enough support to be able to stabilize the situation inside and outside Syria.

Also briefing the Council today was the Special Representative of the Secretary-General on Sexual Violence in Conflict, Zainab Hawa Bangura, who warned of reports of the systematic use of sexual violence not just against women but also against men, boys and girls.

She told reporters that sexual violence is now “widespread” and is triggering a huge displacement of people who cite fear of this type of violence as the reason for leaving their homes.

Ms. Bangura also said many men reported that sexual violence is being used by Government forces as a technique to solicit information, while there have also been reports of many families at the brink of destitution that have given up their daughters for marriage.

Up to 70,000 people, mostly civilians, have been killed since the uprising against President Bashar al-Assad began in March 2011. 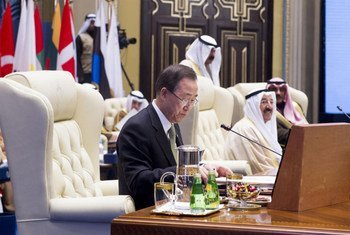 30 January 2013
Countries and regional organizations today pledged more than $1.5 billion to provide humanitarian assistance to civilians affected by the conflict in Syria, exceeding the initial target set by the United Nations and its partners.