IRIN/Kobi Wolf (file)
Israeli soldiers search a Palestinian's car at the Hawera checkpoint outside the town of Nablus in the West Bank.
27 February 2013

Secretary-General Ban Ki-moon today underscored the importance of making progress this year in the Israeli-Palestinian peace process, and called on both parties to refrain from any actions that undermine prospects for resuming negotiations.

“2013 will be a decisive year for the two-State solution,” Mr. Ban said in a message delivered on his behalf to the UN Seminar on Assistance to the Palestinian People, which began today in Rome. “Failure to make tangible progress only means the continuation of suffering, violence and instability in the whole region.”

The two-day seminar, organized by the Committee on the Exercise of the Inalienable Rights of the Palestinian People, is the first such gathering since the General Assembly voted in November 2012 to accord Palestine non-member observer State status at the UN.

In his message, delivered by Assistant Secretary-General for Political Affairs Oscar Fernandez-Taranco, Mr. Ban stated that the 45-year occupation – “as demeaning to the inhabitants as it is destabilizing for the region” – must end.

“Jerusalem must emerge through negotiations as the future capital of two States. As provided in the Road Map, there should be an agreed, just, fair and realistic solution to the refugee issue. Both parties must live up to their commitment to resolving these and all other core issues, namely, territory, security, settlements and water.”

The Road Map is the internationally endorsed plan for two States, Israel and Palestine, living side by side in peace and security.

The Secretary-General also noted that the meeting takes place as the Palestinian Government faces an unprecedented financial crisis that puts at risk the significant achievements in institution-building made in recent years under the leadership of President Mahmoud Abbas and Prime Minister Salaam Fayyad.

“We cannot afford to jeopardize this progress and the considerable investments that have been made by the international community, including the United Nations,” he said, calling on all donors, especially Arab countries, to fulfil their pledges and further increase their support.

The UN continues its support to Palestinian institution-building, and provides critical humanitarian assistance in both the West Bank and Gaza, he said. In response to continuing needs, the UN and its partners are seeking $400 million for humanitarian action this year, with a focus on food insecurity and protection.

“Currently, however, the viability of Palestinian institutions stands on political quicksand, and their future is closely linked to concrete achievements towards the two-State solution, in which Israel and Palestine live side-by-side in peace, security and mutual recognition of each other’s legitimate rights, including self-determination,” Mr. Ban stated.

“There is no substitute for negotiations towards this end, and the parties should refrain from any action that undermines prospects for their resumption.”

He also voiced dismay at Israel’s continuing settlement activity in the West Bank, including East Jerusalem, all of which is illegal under international law and constitutes “ever-greater impediments” to an eventual peaceful solution.

Also of concern is the situation in Gaza, where 80 per cent of the Palestinian residents depend on humanitarian aid as a result of the Israeli blockade, which has been in place for nearly six years.

The Secretary-General also voiced deep concern, as have other UN officials this week, about the death on Saturday of Palestinian prisoner Arafat Jaradat just days after he was detained by Israeli security forces.

“An independent and transparent investigation into the circumstances of Mr. Jaradat’s death should be conducted urgently, the results of which should be made public as soon as possible,” he stated. “Similarly, a solution must be urgently found for the Palestinian prisoners in Israeli custody whose health conditions have dramatically deteriorated as a result of their prolonged hunger strike.”

Abdou Salam Diallo, Chairman of the Palestinian Rights Committee, echoed the Secretary-General’s call for an investigation into Mr. Jaradat’s death, and into prison conditions in general.

The Committee, he added, had “knocked on every door,” including of the Security Council and the International Committee of the Red Cross, advocating the speedy release of prisoners, particularly those on hunger strike, whose lives were in imminent danger.

Mr. Diallo too said that 2013 would be a “pivotal year” for the peace process and that a push by the international community was needed on multiple fronts – political, economic, legal and others – to re-launch international engagement, restart meaningful negotiations, achieve reconciliation, strengthen Palestinian institutions, and end the Gaza blockade. 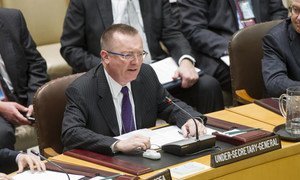 United Nations officials today voiced their concern after a rocket fired from the Gaza Strip landed in southern Israel, breaching the ceasefire reached last November, and called for urgently resuming negotiations aimed at breaking the impasse in the Middle East peace process.