UNAOC/Georges Schneider
Secretary-General Ban Ki-moon addresses the opening of the Fifth Global Forum of the UN Alliance of Civilizations.
27 February 2013

Top United Nations officials today urged world leaders to promote tolerance and respect, adding that these principles can contribute to resolving conflicts, such as those in Syria and Mali, as well as addressing a host of other global challenges.

“Durable solutions need long-term mutual understanding that transcends religious, national, cultural and ethnic boundaries. Such understanding comes from responsible leadership – the theme of this forum,” Secretary-General Ban Ki-moon said in his remarks to the opening of the Fifth Global Forum of the UN Alliance of Civilizations.

“From the world stage to local communities, leaders need to speak the language of tolerance and respect, not division and defamation,” he added. “Wherever tensions divide communities, the opportunity exists for the Alliance to build bridges and to help people move from conflict to collaboration.”

Launched in 2005 through the initiative of Spain and Turkey, and under the auspices of the UN, the Alliance seeks to promote better cross-cultural relations worldwide. The theme for this year’s forum, which comprises decision-makers, experts, and a variety of stakeholders in the field of intercultural and interreligious dialogue, is ‘Responsible Leadership in Diversity and Dialogue.’

Nassir Abdulaziz Al-Nasser, the UN High Representative for the Alliance of Civilizations, said he believed responsible leadership can create the necessary social cohesion, where every man and woman feel included.

“I believe that the Alliance can enhance international cooperation and contribute to the efforts of the United Nations to address the challenges facing humanity today, particularly when they are rooted in identity and cultural underpinnings,” he stated.

Mr. Ban noted that among the areas where the Alliance is “well placed to contribute” is the conflict in Syria. As the situation there continues to worsen, he said he is “extremely concerned about the risk of sectarian violence and mass reprisals” in a country that is an “extraordinary mosaic of tribes, ethnicities, languages and religions.”

He said Syrians will need help from the Alliance, particularly from religious leaders from all denominations, to foster healing and to rebuild damaged relationships.

The Alliance, he continued, could also help “to re-stitch Mali’s tattered tapestry” by engaging religious and community leaders, grassroots organizations and youth in the country, which has been beset by fighting since January 2012.

Mr. Ban also said that Israelis and Palestinians remain polarized, while movement in the Middle East peace process is “overdue.” He added that he was particularly concerned about the region’s youth, who are at risk of growing up with a “demonized, dehumanized – and utterly false – concept of their neighbours.”

The Secretary-General, in separate remarks to the media, said there is a growing understanding that the politics of division, hatred and misperceptions, particularly the language of hatred, “tear the fabric of our society.”

Also addressing the opening session, the President of the UN General Assembly, Vuk Jeremic, called the Alliance a ‘soft-power tool of preventive diplomacy’, which contributes to overcoming tensions among cultures, faiths and societies, while also guarding against globalization.

“It is my deeply-held view that enlarging the common denominator of values and principles which bind us to each other truly serves the cause of peace,” Mr. Jeremic told the more than 1,200 participants gathered for the two-day event.

Mr. Ban also addressed the Alliance’s Intercultural Innovation Award Ceremony, organized by the BMW Group and held last night at Vienna’s Opera House. Noting the work of the ten finalists, Mr. Ban said: “The creative solutions being showcased tonight hold lessons for all communities and for organizations such as the United Nations.”

The first place winner, Puerta Joven of Mexico, received a $50,000 prize for ‘Lenguas Jóvenes’ or Languages of Youth, which brings together indigenous youth groups who are discriminated because of their cultural identity or language.

While in Vienna, the Secretary-General has held a series of bilateral meetings with visiting dignitaries, including the Emir of Qatar, the Spanish Foreign Minister and the Turkish Prime Minister.

He also met with the Armenian Foreign Minister, Edward Nalbandian, with whom he discussed the situation in Syria and the Nagorno-Karabakh peace process.

In a meeting with the President of former Yugoslav Republic of Macedonia, Gjorge Ivanov, Mr. Ban exchanged views on the status of negotiations regarding the “name” issue between Athens and Skopje.

♦ Receive daily updates directly in your inbox - Subscribe here to a topic.
♦ Download the UN News app for your iOS or Android devices.
alliance 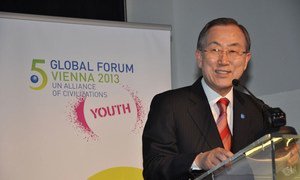 The world’s youth must take the helm in steering the international community through its turbulent period of economic and political transition and towards a more “prosperous, equitable and peaceful future,” Secretary-General Ban Ki-moon urged today, adding that the United Nations was increasing its focus on global youth action to support this cause.