Small farmers at risk of being excluded from biofuel schemes, warns UN agency

IRIN/David Gough
A farmer tends her newly planted Jatropha crop that can grow in extremely arid conditions and which can be used to fuel diesel engines.
26 February 2013

Current biofuel certification schemes are making it difficult for smallholder farmers to participate in export markets, according to a new report released today by the United Nations Food and Agriculture Organization (FAO), which advocates for a change in the way these schemes are currently managed.

Current biofuel certification schemes are making it difficult for smallholder farmers to participate in export markets, according to a new report released today by the United Nations Food and Agriculture Organization (FAO), which advocates for a change in the way these schemes are currently managed.

“As structured, these schemes would tend to favour big players and provide incentives for scaling up production to absorb certification costs,” says the report, entitled Biofuels and the Sustainability Challenge, which was produced by FAO.

The schemes are a way to certify that biofuels used by companies importing or exporting this type of energy source are produced in a sustainable way without destroying forests and other ecosystems. Certification is also supposed to improve businesses’ efficiency, and increase their transparency as well as their awareness of problems in the supply chain.

However, the report finds that current certification schemes might exclude small farmers from achieving certification because they are mainly designed for large-scale agro-businesses. The schemes are also voluntary and for the most part are privately-operated, requiring costs and capacities that many smallholders lack.

Similarly, big companies keep financial records needed for audits while smallholders tend to keep information needed for estimations of greenhouse gas emissions in their head. As a result, many smallholders are not able to obtain certifications.

“Many developing countries express concern that certification schemes can become indirect trade barriers when not managed properly,” the report said.

The report suggests that to increase certification among small businesses, governments and international organizations in consumer and producer countries need to establish mechanisms that create “an enabling environment.”

“Such mechanisms could include national legislation, public procurement policies, tax incentives and tax relief and start-up grants. Financial institutions also have an important role to play to support and enable schemes,” the report said.

While beneficial for the environment, certification schemes must also ensure that they have a positive impact for the economy by ensuring market access and decent wages for workers, the report concluded. 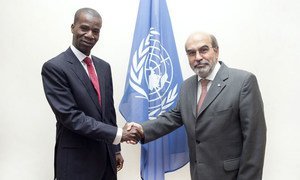 There is an urgent need to help displaced Malian farmers return to their lands before the start of the planting season in May, the United Nations Food and Agriculture Organization (FAO) said today, stressing that the communities’ resilience must be improved to ensure the agricultural sector’s safety.