United Nations officials today voiced their concern after a rocket fired from the Gaza Strip landed in southern Israel, breaching the ceasefire reached last November, and called for urgently resuming negotiations aimed at breaking the impasse in the Middle East peace process.

The rocket, which landed in Ashkelon, reportedly caused some damage but no injuries. It marks the first breach of the Egyptian-brokered ceasefire agreement of 21 November, which brought an end to eight days of violence in Gaza and Israel.

Robert Serry, the UN Special Coordinator for the Middle East Peace Process, said he was “deeply troubled” by resumed indiscriminate rocket fire from Gaza, which is “totally unacceptable.”

Today’s developments, according to a statement issued by Mr. Serry’s office, only underscore the importance of ongoing Egyptian efforts to solidify the truce brokered last November.

In his briefing to the Security Council, Under-Secretary-General for Political Affairs Jeffrey Feltman also underscored the “troubling” nature of today’s incident and stressed the need to inject new life in the political process aimed at reaching a two-State solution.

“We know that there are negative forces on both sides, such as those who fired today’s rocket from Gaza into Israel, who draw strength from stalemate and paralysis,” he stated, adding that both sides have a responsibility to marginalize these forces by creating the conditions, including trust, for a successful negotiating process.

“As demonstrated today in the troubling rocket attack fired from Gaza into Israel, the temperature is again rising between Israelis and Palestinians – with the situation of Palestinian prisoners the most immediate but not only cause – and there is yet no process of negotiation to offer hope on the horizon.”

The UN continues to follow the issue of Palestinian prisoners in Israeli custody, and had voiced concern at the news of the death on Saturday in Israeli detention of Arafat Jaradat. Yesterday, Mr. Serry called for an independent and transparent investigation into the circumstances of Mr. Jaradat’s death, which occurred just a few days after his arrest.

Mr. Feltman described as “a most troubling development” that, earlier today, Gaza militants from the Al-Aqsa Martyrs Brigade cited this death in claiming responsibility for the rocket attack. The prisoner’s death has also sparked a series of demonstrations and clashes, which have reportedly resulted in the injuries of 43 Palestinians by Israeli security forces.

It is a moment of “heightened risks across multiple fronts” in the Middle East, the Under-Secretary-General pointed out, noting that Syria continues to be a source of “extreme concern” for the world body.

The nearly-two-year-old conflict has left over 4 million people in need of humanitarian assistance, including 2 million internally displaced, and led more than 900,000 people to flee to neighbouring countries, including over 150,000 this month alone, he stated.

“Even tentative steps to dialogue are struggling to take root,” Mr. Feltman added. “The destructive military spiral churns more forcefully each day and threatens to pull its neighbours, most notably and worrisomely Lebanon, into its vortex.

“Opportunities do exist to reverse these trends, but not if the international community sits still. Stepped up efforts by this Council and its members can make a substantial difference while there is still time to do so.” 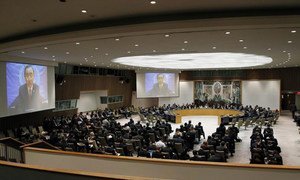 United Nations Secretary-General Ban Ki-moon – followed by the Security Council – welcomed the ceasefire announced today after a week of devastating violence in southern Israel and Gaza, and stressed that it is imperative that both sides stick to it.