UN Photo/Jean-Marc Ferré
Video message by Secretary-General Ban Ki-moon marking the 20th anniversary of the Vienna Declaration and Programme of Action that led to the creation of the High Commissioner for Human Rights.

25 February 2013
Top United Nations officials today praised the 1993 Vienna Declaration, which led to the creation of the post of the UN High Commissioner for Human Rights, strengthened human rights work, and reinforced the universality of human rights and the duty of States to uphold them.

Top United Nations officials today praised the 1993 Vienna Declaration, which led to the creation of the post of the UN High Commissioner for Human Rights, strengthened human rights work, and reinforced the universality of human rights and the duty of States to uphold them.

“Human rights and fundamental freedoms are the lifeblood of the United Nations,” Secretary-General Ban Ki-moon said in a video message to panel discussion in Geneva to commemorate the 20th anniversary of the Vienna Declaration and Programme of Action.

“Since the Organization was founded, Member States and civil society partners have worked to build a body of human rights instruments that can uphold the principles of the UN Charter and the Universal Declaration of Human Rights,” he noted.

The declaration – adopted at the World Conference on Human Rights, held in Vienna in June 1993, and later endorsed by the General Assembly – led to the creation of the post of the High Commissioner for Human Rights.

As a member of a women’s rights organization who participated in a side event at the 1993 Conference, High Commissioner for Human Rights Navi Pillay recalled that the event took place amid a “time of transformation” with the end of the Cold War and as progress had been made in dismantling apartheid in South Africa.

In remarks read out on her behalf by Bacre Ndiaye, Director of the Human Rights Council and Special Procedures Division in the Office of the UN High Commissioner for Human Rights (OHCHR), Ms. Pillay said the Conference was also the first time that representatives of governments and civil society spoke about women’s rights at a conference dedicated to human issues and not specially women’s issues.

“This shift in human rights thinking paved the way for key advances,” she noted, including the adoption of the UN Declaration on violence against women, and the Optional Protocol to the Convention on the Elimination of All Forms of Discrimination against Women. It also contributed to how the gender perspective was integrated into human rights work and the Organization as a whole.

“However, much remains to be done. As was the case 20 years ago, women and girls continue to be sexually and physically abused, and their abusers go unpunished,” Ms. Pillay said, adding that women’s political participation and full empowerment are a “work in progress.”

The High Commissioner also urged civil society to continue its strong engagement with the UN, noting the vital role non-governmental organizations played in the Vienna Declaration and Programme of Action

“The United Nations cannot attain its lofty objectives without the participation of those it is supposed to serve. It is only by listening to their concerns that we can we ensure that our action is grounded in the real lives of real people,” she said.

The panel was held as part of the 22nd session of the UN Human Rights Council which began in Geneva today. 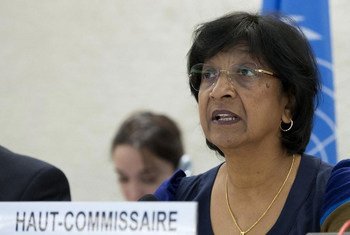 25 February 2013
As the main United Nations human rights body began its work today, senior UN officials stressed the importance of strengthening international processes that will monitor and prevent rights violations around the world as well as hold perpetrators accountable for their crimes.