Addressing the opening of the 22nd session of the Human Rights Council in Geneva, UN High Commissioner for Human Rights Navi Pillay said that despite significant progress over the past two decades on issues such as the elimination of violence against women and tackling impunity for international crimes, there continue to be systematic human rights violations around the world.

“The promise of respecting all human rights for all people is still a dream for too many,” Ms. Pillay said. “Hundreds of thousands of people have died in genocides in Rwanda and Bosnia and Herzegovina; the Palestinian territories are still occupied; massive violations have occurred in Iraq and Sri Lanka; and war crimes continue to be committed in numerous internal conflicts, including those continuing in Afghanistan, the Democratic Republic of the Congo, Mali, Sudan and Syria.

“We must continue to nurture and strengthen the system designed to deal with such crimes and violations, and those who commit them. It is also critical that we in the international community do our utmost to prevent such situations from developing or deteriorating,” she said.

Ms. Pillay underlined that while many instances of human rights violations have been referred to the International Criminal Court (ICC) – the world’s first permanent tribunal with the powers to prosecute suspected perpetrators of war crimes – this can only happen if the State concerned is among the 122 States Parties of the Rome Statute, or if a situation is referred to it by the Security Council.

In particular, Ms. Pillay said this had not happened in the case of Syria, where there have been constant allegations of human right violations committed by the Government forces and the opposition since the uprising against President Bashar al-Assad began in March 2011.

“Two important situations – Darfur in 2008 and Libya in 2011 – have been referred, but the Security Council has so far failed with regard to Syria, despite the repeated reports of widespread or systematic crimes and violations by my office, the International Commission of Inquiry on Syria, civil society organizations and Special Procedures,” she said.

In September, Ms. Pillay urged the Security Council to refer the case of Syria to the ICC. Since then, the High Commissioner has repeated this call, warning that possibly up to 70,000 people have been killed, hundreds of thousands have been displaced, and over 4 million people have been affected by the violence and are in dire need of humanitarian assistance.

“Again, despite the truly inspiring advances in combating impunity and ensuring accountability both at the international and national levels, including through transitional justice processes, there are still far too many people with command responsibility who escape justice for serious crimes and gross human rights violations,” Ms. Pillay said.

The President of the General Assembly, Vuk Jeremic, told the Council that, like Ms. Pillay, he was gravely concerned with the situation in Syria, and emphasized the need to act immediately to achieve a political solution.

“For close to two years, the international community has failed to put a stop to the carnage,” he said. “The immediate cessation of hostilities should be our foremost priority.”

Mr. Jeremic appealed to all sides to cease the violence, and warned that without a political solution the consequences would be devastating for the country and the international community as a whole. “There is a manifest danger that the violence will simply be allowed to run its course – a scenario that would continue to disproportionately affect the civilian population.”

In her address to the Council, Ms. Pillay also noted that while the increased involvement of civil society in defending human rights is a welcome development, there have been an alarming number of reports of governments persecuting human rights defenders because of the nature of their work.

“I continue to hear of brave human rights defenders, journalists or bloggers who have been threatened, harassed, arrested or killed because of their work on behalf of the human rights of others,” Ms. Pillay said. “Such intimidation has sometimes even occurred during the proceedings of this Council. We must never tolerate such pressure, or reprisals against those who rightly seek to engage the international human rights system.”

Ms. Pillay also urged Member States to continue to support the work of her office (OHCHR) by providing the necessary resources it requires to fulfil its mandate “to promote and protect the human rights of everyone everywhere.” 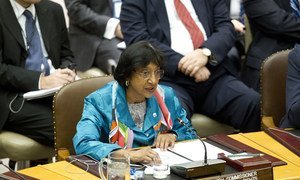 Top United Nations officials today highlighted the need for the Security Council to act with a unified voice to protect innocent lives, noting that civilians, in Syria and elsewhere, remain subject to unacceptable threats to life and dignity in conflict zones.