Cocaine trafficking, the smuggling of migrants, and the trafficking of fraudulent pharmaceuticals are among the numerous damaging illegal activities perpetrated by transnational organized crime syndicates which continue to fuel instability across West Africa, a new United Nations report released today has warned.

The report, a threat assessment issued by the UN Office on Drugs and Crime (UNODC) and entitled Transnational Organized Crime in West Africa, cautions that the profit from cocaine trafficking alone may still be larger than the national security budgets of several West African countries, causing difficulties for local law enforcement.

In addition, it notes that West African criminal groups have become increasingly independent and enterprising in their ability to bring drugs into the region.

“State institutions and the rule of law are weak in most of these countries and unless these organized crimes are tackled, instability is likely to persist and increase.”

According to UNODC estimates, at least 50 tons of cocaine from the Andean countries transit through West Africa every year, heading north to Europe where they are worth almost $2 billion in street value. Most cocaine entering Africa from South America makes landfall around Guinea-Bissau in the north and Ghana in the south and are shipped to Europe via drug mules on commercial flights.

The new report points out, however, that cocaine is not the only illicit drug affecting the region. In particular, it cites the “worrying” emergence of methamphetamine production in Nigeria, where two methamphetamine labs were detected in the 2011-2012 biennium, and a growth in trans-regional trafficking with some 3,000 methamphetamine couriers alleged to have transported an estimated $360 million worth of drugs from West Africa to East Africa in 2010. The report says that this is an indication that West African criminal groups are becoming increasingly influential in the transnational drug market.

Last July, Yury Fedotov, the UNODC Executive Director, confirmed to the UN Security Council that with the increased trafficking, production and consumption of drugs, as well as piracy and insecurity, West Africa represented one of the key challenges for his agency as it had steadily transformed from being simply a transit route into a final destination of illegal substances as well.

“The complex challenges West Africa faces represent a severe test for the individual countries and for the region as a whole,” Mr. Fedotov said. “UNODC will continue to work with its partners to build the commitment and develop the necessary solutions in this extremely fluid and fast-moving environment.”

Other criminal markets are also discussed in the report, including the smuggling of migrants from West Africa to Europe, the trafficking of fraudulent pharmaceuticals from Asia to West Africa, and maritime piracy in the region.

The report warns that while the trends and profits for these diverse markets tend to vary, their potential for sowing corruption, political instability, hampering development and promoting conflict remains “too large for the region to deal with on its own.”

“West African States need to do more in terms of data collection and sharing, regional coordination in law enforcement and enhanced drug treatment and rehabilitation services, to mention some recommendations,” admits the UNODC report, while noting that the countries in the region are unable to fight the crime epidemic alone.

“They will need support from the international community to make substantial progress in reducing the negative impact of transnational organized crime on the region’s development.” 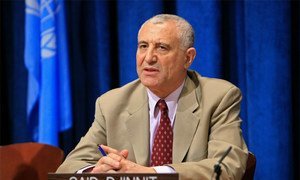 While significant progress has been made over the past years in promoting and consolidating peace in West Africa, the continued attention and support of the United Nations remains critical, according to the world body’s top envoy for the region.