UN expert urges greater independence for courts in the Maldives

Judges and lawyers in the Maldives are not sufficiently independent from external pressures and interferences, a United Nations independent expert warned today wrapping up a visit to the Indian Ocean archipelago.

Judges and lawyers in the Maldives are not sufficiently independent from external pressures and interferences, a United Nations independent expert warned today wrapping up a visit to the Indian Ocean archipelago.

“The concept of independence of the judiciary has been misconstrued and misinterpreted in the Maldives, including among judicial actors,” the UN Special Rapporteur on the independence of judges and lawyers, Gabriela Knaul, told journalists in Malé.

Ms. Knaul noted that a power struggle which ensued from a “lack of understanding in the delimitation of the respective competences” of the Parliament, the Government and the judiciary had “serious implications on the effective realization of the rule of law.”

She added that the separation of powers is “the bedrock upon which the requirements of judicial independence and impartiality are founded” and represents an essential requirement of the proper administration of justice.

Presenting her preliminary findings on the functioning of the justice system in Maldives, Ms. Knaul said there was insufficient dialogue, respect for the new Constitution created in 2008, transparency and access to information, and accountability to allow the judiciary to function property.

She also noted a relatively low number of sitting female judges, lack of education and training possibilities for persons in the judicial sector, and the lack of trust the general public has in the country's judiciary.

Ms. Knaul said the challenges she highlighted should be addressed as a matter of great urgency in line with the Constitution and international human rights standards.

“In the longer-term, the Maldivian people should consider reforms to the Constitution, with the view to improving the tools and measures at the disposal of the State,” she added, to ensure the independence of the judiciary and the delivery of fair and impartial justice.

During the visit which began on 17 February, Ms. Knaul met with President Mohamed Waheed and the Minister of Foreign Affairs, Abdul Samad Abdullah, as well as other representatives of the Government, Parliament and the courts. She also spoke with members of national and international non-governmental organizations based in Malé and Addu atoll.

She will present her written report at the United Nations Human Rights Council in Geneva this summer.

Independent experts, or special rapporteurs like Ms. Knaul, are appointed by the Geneva-based UN Human Rights Council to examine and report back, in an unpaid capacity, on specific human rights themes. 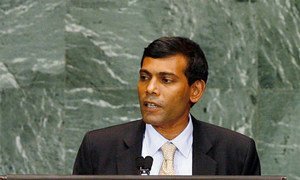 UN chief concerned about political developments in the Maldives

Secretary-General Ban Ki-moon has voiced his concern about the political situation in the Maldives, where former President Mohamed Nasheed has sought refuge in the Indian High Commission, and is urging all parties to work towards conditions conducive for the upcoming elections in line with the country’s Constitution.