UN Photo/Evan Schneider
Secretary-General Ban Ki-moon addresses high-level meeting for the Peace, Security and Cooperation Framework for the Democratic Republic of the Congo and the Region.
24 February 2013

“It is my earnest hope that the Framework will lead to an era of peace and stability for the peoples of the Democratic Republic of the Congo and the Great Lakes region,” said Secretary-General Ban Ki-moon today at the signing ceremony in the Ethiopian capital, Addis Ababa.

He stressed that the signing is a significant event, but only the beginning of a “comprehensive approach that will require sustained engagement.”

By doing so, they agree to preserve and protect the territorial sovereignty, as well as the peace and stability, of the Democratic Republic of the Congo, Mr. Ban said.

The UN, the African Union, the 11-country International Conference on the Great Lakes Region, and the 14-member Southern African Development Community (SADC) act as guarantors. A UN Special Envoy is expected to be appointed to support the Framework's implementation.

The Secretary-General said he had been deeply disturbed by the violence that erupted in April last year in eastern part of the country when the M23 - made up of former national army troops - mutinied. Clashes between the fighters from the M23 and the DRC's national army (FARDC) displaced nearly a million people in North Kivu, and in recent weeks, more than 300,000 people have been displaced by additional fighting in the south-eastern province of Katanga.

At today's signing, Mr. Ban stressed that the regional partners must act on the commitments and oversight mechanisms which aim at addressing key national and regional issues.

“I therefore call for your sustained political, technical and financial support, especially over the long-term, to accompany the implementation of the national and regional commitments outlined in the Framework,” Mr. Ban said.

He urged the participating members to meet at least twice a year, on the sidelines of the AU Summits and in the margins of the United Nations General Assembly held annually in September in New York, to review progress on the implementation of the Framework and agree on the way forward.

“Your active participation in the national and regional oversight mechanisms will also be essential for the success of the process,” Mr. Ban emphasized.

In a special report to be issued in the coming days, Mr. Ban said he outlines a “new comprehensive approach” to addressing the underlying causes of the conflict in the country and the region with all relevant partners.

The report includes various components of the Framework signed today, as well as a strengthened political and security role for the UN Organization Stabilization Mission in the DRC (MONUSCO).

In recent months, there has been growing support among Member States and UN senior officials to deploy an 'Intervention Brigade' with peace enforcement authorities beyond traditional UN peacekeeping. The brigade would be comprised from troop contributing countries and operate under the umbrella of MONUSCO. The decision to approve such a deployment is currently under discussion with the UN Security Council.

Regional countries “have committed to putting in motion” such a brigade, Mr. Ban said.

Speaking to journalists after the signing event, Mr. Ban added that he will brief the Security-Council upon his return to New York and that he expects the 15-member Council, which includes Rwanda, to make a decision “very soon.”

In a press statement, the Security Council welcomed the signing of the Framework but said members remain “deeply concerned” by the worsening security and humanitarian situation in the eastern part of the DRC.

They reiterated their demand that the M23 cease immediately attempts to establish an illegitimate parallel administration and that “the M23, the FDLR and all other armed groups cease immediately all forms of violence and destabilizing activities.”

On the sidelines of the signing ceremony, the Secretary-General met privately with the President of the Democratic Republic of the Congo, Joseph Kabila Kabange, and with Uganda's Vice-President Edward Ssekandi. Ugandan President Yoweri Kaguta Museveni was unable to attend. 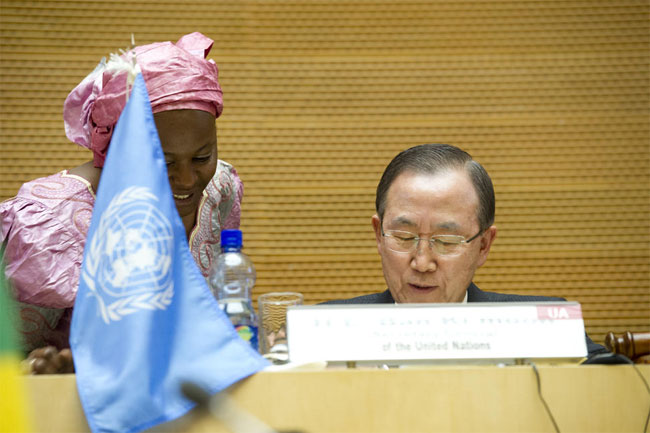 Secretary-General Ban Ki-moon at the signing ceremony for the Peace, Security and Cooperation Framework for the DR of Congo and the Region. UN Photo/Evan Schneider 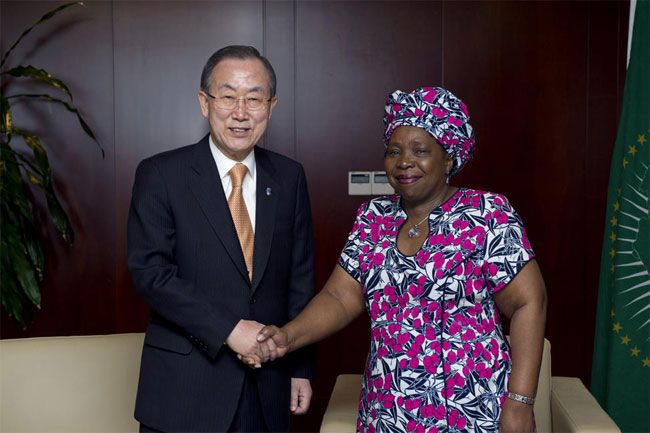 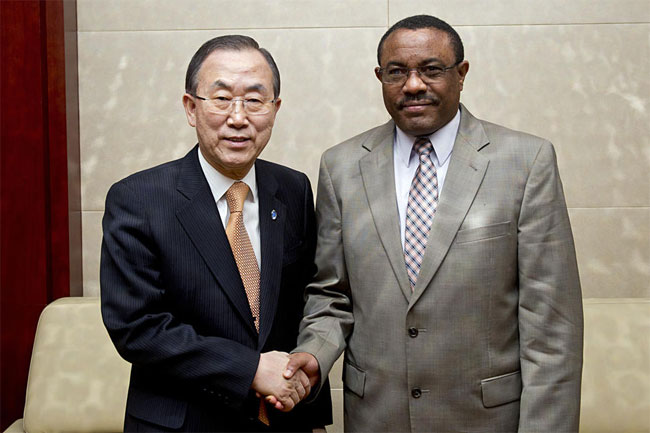 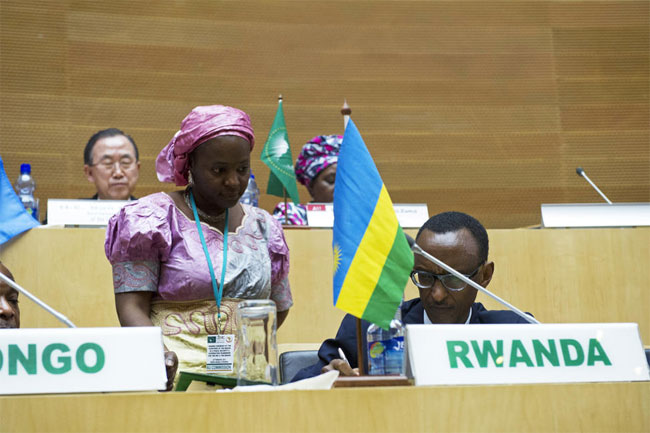 President Paul Kagame of the Republic of Rwanda at the signing ceremony. UN Photo/Evan Schneider 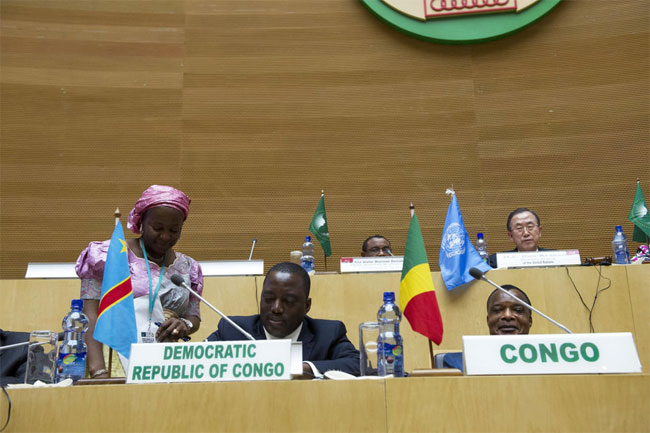 President Joseph Kabila Kabange of the Democratic Republic of the Congo at the signing ceremony. UN Photo/Evan Schneider 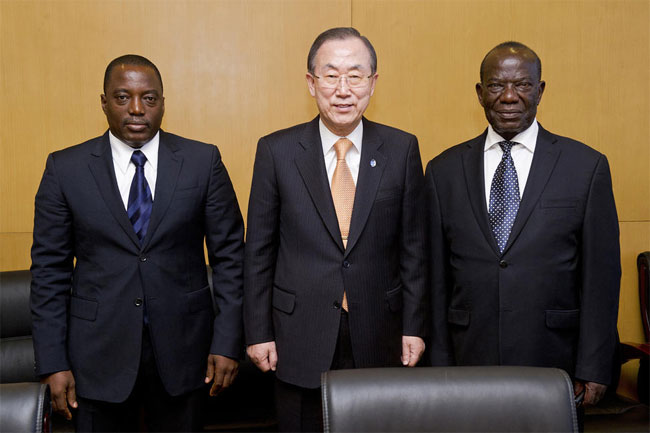 He also held a bilateral meeting with the President of the Republic of Mozambique and Chair of the SADC, Armando Emílio Guebuza, who expressed support for a possibile military brigade within MONUSCO.

Discussing the wider situation in other African countries, Mr. Ban met with the Chairperson of the African Union Commission, Nkosazana Dlamini-Zuma, with whom he discussed the political situations in Kenya, Mali and Somalia. Mr. Ban also noted the lack of progress in the resolution of the remaining outstanding issues between Sudan and South Sudan and the deteriorating security situation in parts of Darfur.

Mr. Ban also met with the Foreign Minister of the Central African Republic, Colonel Parfait Anicet Mbay, to discuss political and security developments in that country.

Today's Framework agreement had been expected to be signed at the African Union summit in Addis on 28 January but was delayed over what Mr. Ban called “procedural issues”.

Ahead of a new peace deal for the Democratic Republic of the Congo (DRC) to be signed this weekend, the top United Nations official there warned today that the security situation is unstable, and urged the Security Council to provide the necessary support and authorization for an additional military brigade force within the current UN peacekeeping force.