22 February 2013
United Nations Secretary-General Ban Ki-moon is speaking out about the importance of news reporting and protection of freedom of expression in a video message released today for a grassroots campaign, the 'Day Without News.'

United Nations Secretary-General Ban Ki-moon is speaking out about the importance of news reporting and protection of freedom of expression in a video message released today for a grassroots campaign, the 'Day Without News.'

"A day without news may seem unthinkable in this connected and globalized world. Yet every day, the voices of the news are being silenced," the Secretary-General said.

A journalist is killed every week, and 9 out of 10 of those cases go unpunished, Mr. Ban noted.

The head of the UN agency mandated to promote and protect freedom of expression and press freedom, Irina Bokova, condemned a record 121 killings of journalists, media workers and citizen reporters last year.

As part of an effort to combat this violence, the Paris-based UN Educational, Scientific and Cultural Organization (UNESCO) launched the UN Plan of Action on the Safety of Journalists and the Issue of Impunity.

The goal, Mr. Ban said, is simple: "to ensure that every journalist can do her or his job safely."

Every year on 3 May, the UN marks World Press Freedom Day - an opportunity to speak out for the safety of journalists, and for combating impunity, in the real and digital worlds.

The Secretary-General's video is hosted on adaywithoutnews.com. According to the site, the 'Day Without News' campaign originated during a panel discussion with journalists at UN Headquarters, and aims to raise awareness of the hostile and dangerous conditions that many reporters and photographers work under around the world.

The Day is marked symbolically on 22 February - the anniversary of the 2012 killings of The Sunday Times correspondent, Marie Colvin, and freelance photographer, RÃƒÂ©mi Ochlik, in Homs, Syria.

According to reports, no one has been held accountable for their deaths. 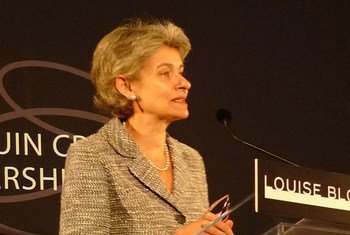