The Security Council today extended the United Nations office in Guinea-Bissau for three months, and requested Secretary-General Ban Ki-moon to provide recommendations on its future mandate and any possible readjustment in the world body’s support to the West African nation.

In a resolution adopted unanimously by the 15-member body, the Council decided that the UN Integrated Peacebuilding Office in Guinea-Bissau (UNIOGBIS) will continue its work until 31 May of this year.

The Office, currently headed by the Secretary-General’s Special Representative, José Ramos Horta, was established by the Council in 2009 and tasked with promoting stability in the country, which has been beset by coups and political instability since it became independent in the early 1970s.

Last year, rogue soldiers seized power in a military take-over on 12 April – just days ahead of the country’s presidential run-off election – prompting calls from the international community for the return to civilian rule and the restoration of constitutional order. Recent incidents include an attack on a military base in October, which reportedly resulted in numerous deaths.

The Council today reiterated its demand to the armed forces “to submit themselves fully to civilian control.” It also urged the national authorities to take all necessary measures to protect human rights and put an end to impunity.

In addition, the Council requested Mr. Ban to continue to work through UNIOGBIS, in coordination with other partners, on the ongoing dialogue process among political parties, “to facilitate the early finalization of a broader political agreement for the restoration of constitutional order and the holding of free, fair and transparent elections.”

It also called on all stakeholders in the country to “deepen the internal political dialogue” to create a conducive environment for free, fair and transparent polls, acceptable to all, for a rapid return to constitutional order and the long-term stabilization of Guinea-Bissau.

The Secretary-General was also requested to submit his report with respect to the mission’s future mandate and possible readjustments to the Council by 30 April. 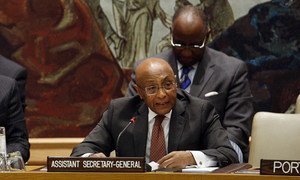 In spite of the recent steps taken by various parties in Guinea-Bissau to advance the transition process, insecurity and impunity are still serious issues that the Government must urgently address, a senior United Nations official said today.