UNHCR/V. Tan
Some of those risking their lives on high sea voyages set off from waterways like this one in Rakhine state, Myanmar.

22 February 2013
The United Nations High Commissioner for Refugees (UNHCR) is calling for urgent action to prevent the rising numbers of people killed trying to cross the Indian Ocean in smugglers’ boats, particularly the increasing numbers of women and children from the stateless Rohingya community.

“It is clear that the Indian Ocean has become for people fleeing their countries one of the deadliest stretches of water in the world,” the agency’s spokesman, Andrej Mahecic, told journalists in Geneva.

The agency estimates that out of the 13,000 people who left on smugglers’ boats in 2012, close to 500 died at sea when their boats broke down or capsized in the Bay of Bengal.

“Already in 2013, several thousand people are believed to have boarded smugglers boats in the Bay of Bengal,” Mr. Mahecic added.

Of particular concern is the Rohingya community from western Myanmar’s Rakhine state which is not recognized by the Government and remain stateless. Fighting between ethnic Rakhine Buddhists and Rohingya Muslims in the state erupted last June, uprooting 115,000 people – the majority of them Rohingya – and sending them to live in internally displaced camps in Myanmar or to refugee and makeshift camps in Bangladesh and neighbouring countries.

While men have usually been the ones crossing, recent weeks have seen an increase of women and children among smuggled passengers, signalling growing desperation and lack of prospects, according to UNHCR.

Among the most recent incidents, around 90 people believed to be Rohingya died of dehydration and starvation during a two-month journey. More than 30 survivors from the same vessel were rescued last weekend by Sri Lanka's navy off that country's coast.

“UNHCR is greatly saddened by this latest terrible ordeal, and commends the quick action of the Sri Lankan navy in rescuing this group and providing immediate medical attention,” Mr. Mahecic said. He added that the agency is ready to support the Sri Lankan authorities in assisting any among them who are in need of international protection.

Meanwhile, UNHCR is urging governments, including Bangladesh, Malaysia, Sri Lanka and Thailand, which have accepted large numbers of refugees, to agree on protocols for the safe and quick disembarkation of rescued passengers and the provision of urgent humanitarian assistance.

“UNHCR recognizes the regional dimension of the irregular movements of refugees, asylum-seekers and migrants by sea. Genuine cooperative regional approaches that promote sharing of burdens and responsibility could offer asylum-seekers and refugees an alternative to dangerous and exploitative boat journeys,” Mr. Mahecic said.

The agency said it will facilitate discussions between governments and international organizations on this topic at a regional meeting to be held in Jakarta, Indonesia, in March. 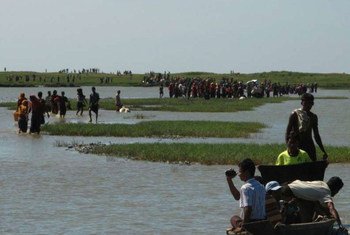 11 January 2013
More than 2,000 people have fled Myanmar’s northern Rakhine state and Bangladesh on boats run by smugglers putting their lives at risk, the United Nations refugee agency said today, warning that the situation of those displaced by the violence in Rakhine grows more desperate every day.