The President of France, François Hollande, will receive the United Nations cultural agency’s peace prize this year for his “valuable contribution to peace and stability in Africa,” it was announced today.

The President of France, François Hollande, will receive the United Nations cultural agency’s peace prize this year for his “valuable contribution to peace and stability in Africa,” it was announced today.

“After analyzing the global situation, it is Africa that held the attention of the Jury with the various threats affecting the continent,” said the former President of Mozambique, Joaquim Chissano, who chaired the Jury of the Félix Houphouët-Boigny Peace Prize.

“Having assessed the dangers and the repercussions of the situation on Africa, and on Mali in particular, as well as on the rest of the world, the Jury appreciated the solidarity shown by France to the peoples of Africa,” Mr. Chissano said after the Jury’s meeting in Paris.

The award, created in 1989 by the UN Educational, Scientific and Cultural Organization (UNESCO), honours people, institutions and organizations that have contributed significantly to the promotion, research, preservation or maintenance of peace. It is named for the first president of Côte d’Ivoire.

“The Jury condemns the violation of Mali’s territorial integrity, the violation of human rights, the taking of hostages and the destruction of the cultural heritage of humanity in Timbuktu,” Mr. Chissano said. “The Jury therefore decided to award the Félix Houphouët-Boigny Peace Prize to Mr. François Hollande, President of the French Republic, for his great contribution to peace and stability in Africa.”

The award ceremony for the prize – which consists of $150,000, a gold medal and a diploma – will be held on a date to be announced. 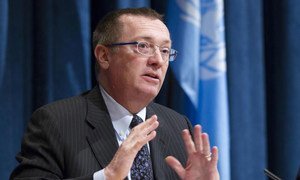 International efforts to help Mali emerge from its current crisis must be carefully balanced so that adequate security assistance is provided but, at the same time, Malians remain in charge and engaged in making progress on the political front, a top United Nations official said today.