21 February 2013
Unless Africa’s leaders prioritize environmental and health issues, and prevent the degradation of health-promoting food and medicinal plants, people’s health and productivity will continue to suffer, warns a new report released today by the United Nations Environment Programme (UNEP).

Unless Africa’s leaders prioritize environmental and health issues, and prevent the degradation of health-promoting food and medicinal plants, people’s health and productivity will continue to suffer, warns a new report released today by the United Nations Environment Programme (UNEP).

“Africa’s population is growing at the fastest rate in the world and its economy is expanding at a commensurate rate, yet not enough focus has been placed on the role environmental concerns play in ensuring the well-being of this expanding, dynamic continent’s citizens,” said UNEP Executive Director Achim Steiner.

Environmental risks contribute to 28 per cent of Africa’s diseases, according to the African Environment Outlook-3 (AEO-3). Diarrhoea, respiratory infections and malaria account for 60 per cent of known environmental health impacts in Africa.

Commissioned by the African Ministerial Conference on the Environment (AMCEN), a permanent forum that meets every two years, the report highlights emerging issues and trends related to the environment, and proposes policy changes at the national, regional and global levels.

Among its finding, the air pollutant ‘particulate matter’ is a threat in poor rural areas, where little access to cleaner stoves and fuels causes significant health impacts through indoor pollution. Air pollution throughout the continent can be up to 30 times higher than World Health Organization (WHO) limits.

In Côte d’Ivoire, for example, the National Centre for Agronomical Research in Abidjan estimates that 65 per cent of the illnesses suffered by market gardeners, cotton growers, mango producers and consumers are due to pesticides.

The report also spotlights a lack of capacity to deal with the growing effects of climate change; inadequate water, sanitation and hygiene – in 2010, only 60 per cent of the sub-Saharan Africa population had access to safe water; and poor waste disposal practices.

Other issues highlighted include the negative impact of degradation of health-promoting goods and services such as food and medicinal plants made possible by land and marine biodiversity. For example, 80 per cent of Africa’s rural population depends on traditional medicines harvested from nature.

The report “gives policy-makers a clear pathway to a sustainable and healthy future,” Mr. Steiner said.

“Africa is moving into a new phase that could see the continent become a major player in the transition to a global inclusive Green Economy, but to do that it needs a healthy population with guaranteed access to well-managed natural resources,” he added.

The UN Framework Convention on Climate Change (UNFCCC) recently signed an agreement with the East African Development Bank to increase participation in clean development projects. The agreement establishes a regional collaboration centre in Kampala, Uganda, that will support the identification of projects under the Clean Development Mechanism (CDM), provide assistance for their design, and offer opportunities to reduce transaction costs.

According to UNFCCC, there are more than 6,000 projects already registered in 83 developing countries.

However, today’s report cautions that in addition to new projects, there are already many good policies to address environmental change on the books; the challenge lies in their implementation.

“These policies must be strongly implemented to have an impact, and enforcement mechanisms should be put in place and strengthened to reduce the negative consequences,” said Terezya Huvisa, Minister of State - Environment of Tanzania and President of AMCEN.

“If the recommendations in AEO-3 are followed, our citizens can look forward to healthier, and ultimately more productive, lives.” 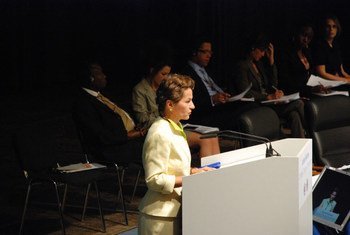 13 February 2013
The United Nations has signed an agreement with the East African Development Bank to increase participation in clean development projects in the region, it was announced today.