20 February 2013
The top United Nations official in South Sudan is urging the communities in the eastern state of Jonglei to break the cycle of violence, following a “very serious” attack and cattle raid, while UN and local officials are poised to distribute humanitarian aid to thousands of people affected by the fighting.

“The main purpose of my visit today is to (meet) the people and express my most sincere condolences to those who have lost their loved ones,” the Special Representative of the Secretary-General for South Sudan, Hilde F. Johnson, said during yesterday’s visit.

According to media reports, more than 100 people were killed and many others injured in an armed attack on a migrating group of people from the town of Walgak.

While in Walgak, Ms. Johnson met with people wounded during the attack and other community members, including County Commissioner Goi Jooyu Youl. She encouraged residents to contain their anger and frustration, and to give peace a chance.

Following a humanitarian needs assessment, aid would be delivered in a few days to about 10,000 people, she said.

Ms. Johnson, accompanied by other senior officials from the UN Mission in South Sudan (UNMISS), including Force Commander Maj. Gen. Delali Johnson Sakyi, described the 8 February attack as “very serious” and said it threatened the stability of the entire state of Jonglei.

“We are very worried about this,” Ms. Johnson told a group in the state capital of Bor following a meeting with Governor Kuol Manyang Juuk, who vouched his government would “do its best to prevent further attacks.”

UNMISS, which is headed by Ms. Johnson, has been working with local officials since the attack to ascertain what happened.

The Mission would like to see stability in Jonglei state, she stated, noting that it is looking at what it can do under the current circumstances to end the cycle of violence. At the same time, she underscored that “significant efforts” are needed from the government and community leaders to now ensure stability.

Ms. Johnson was slated to travel to Pibor County today to meet with local officials, traditional chiefs and communities, and to discuss ways to counter cattle raiding and other forms of insecurity. 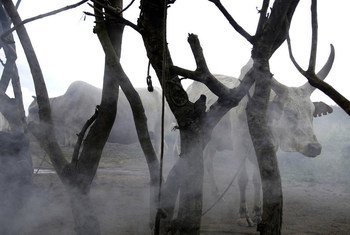 11 February 2013
The United Nations peacekeeping mission in South Sudan today dispatched a team to investigate reports that more than 100 people have been killed and many others injured in a cattle raid in the eastern part of the country.