19 February 2013
Two United Nations experts today urged the United States House of Representatives to approve a revised bill which strengthens the legal options for female victims of violence and sexual abuse, and extends protections to indigenous, immigrant and gay victims.

The US Senate voted on 12 February to reauthorize the Violence Against Women Act (VAWA), which lapsed in 2011, sending it to the other chamber of the US Congress.

VAWA was reauthorized by Congress in 2000 and 2005, to encompass more sections of society and to expand funding to address domestic violence.

The bill enhances protections for Native American and Alaskan Native women; lesbian, gay, bisexual, and transgender victims; and immigrant victims and their children, according to the news release.

The latest revision also strengthens the judicial powers given to tribal courts on reservations, which currently cannot pursue non-Indians who attack Indian women on tribal land.

“Congress should act promptly to pass key reforms to the Violence Against Women Act that bolster indigenous tribes’ ability to prosecute cases involving violence against indigenous women,” emphasized the Special Rapporteur on the rights of indigenous peoples, James Anaya.

The Act, drafted in part by the office of then Senator and current Vice-President Joe Biden, created the Office on Violence Against Women within the Department of Justice.

“We would like to reiterate the importance of reauthorizing VAWA in order to build upon its accomplishments and continue striving for more adequate responses from the authorities in providing protection to victims and ensuring accountability for perpetrators,” stressed the experts, who have both visited the US in the past couple of years.

The event, organized with the UNiTE to End Violence against Women campaign, comes ahead of the UN Commission on the Status of Women due to begin its session on 4 March.

US must do more to protect women from domestic violence, UN rights expert warns 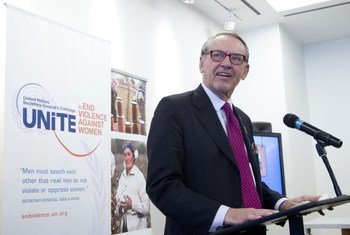 14 February 2013
United Nations officials today joined millions of people around the world who are taking a stance against violence against women as part of the ‘One Billion Rising’ campaign.