18 February 2013
The melting of sea ice and the resulting rush for resources require effective measures to avoid damage in the Arctic, according to an annual United Nations study of emerging environmental issues that also highlight risks from chemicals and the recent spike in illegal wildlife trade.

A reduction in Arctic summer ice cover has become more intense in recent years, culminating in a record low of 3.4 million square kilometres in 2012 – 18 per cent below the previous recorded minimum in 2007 and 50 per cent below the average in the 1980s and 1990s, stated the UN Environment Programme (UNEP), which added that land ice is also retreating and permafrost is melting.

The agency’s “Year Book 2013” says that the retreating ice brings easier access to natural resources such as gas and oil, thus prompting increased human activity that may threaten the already fragile ecosystems and wildlife.

“Changing environmental conditions in the Arctic – often considered a bellwether for global climate change – have been an issue of concern for some time, but as of yet this awareness has not translated into urgent action,” UNEP Executive Director Achim Steiner said in a news release.

“In fact, what we are seeing is that the melting of ice is prompting a rush for exactly the fossil fuel resources that fuelled the melt in the first place,” he added. “As the ‘UNEP Year Book 2013’ points out, the rush to exploit these vast untapped reserves have consequences that must be carefully thought through by countries everywhere, given the global impacts and issues at stake.”

As ice and snow recede, making access and transport easier, the Arctic is expected to play a greatly expanded role in world energy and minerals supplies, the agency pointed out.

UNEP noted that the combination of rapid environmental transformation and the rush for resources can interrupt hydrology, endanger ecosystems, prevent the passage of migrating caribou and reindeer and severely disrupt the traditional lifestyles of indigenous peoples. It also raises important geopolitical issues that are likely to have ramifications beyond far beyond the Arctic.

It added that the Arctic Council – the core of which is formed by Canada, Denmark, Finland, Iceland, Norway, Russia, Sweden and the US – has a crucial role to play in ensuring any resource exploitation is done responsibly.

The report contains many recommendations on the way forward for the Arctic, with the most important being the reduction of greenhouse gas emissions. No steps to exploit the new environmental state of the Arctic should be taken without first assessing how the exploitation would affect ecosystems, the peoples of the North and the rest of the world as the potential for major environmental damage is high, it added.

Year Book 2013 also highlights the need for better information and sound management to minimize the risks from chemicals and raises the issue of the recent spike in the illegal trade in elephant ivory and rhino horn.

While chemicals bring many benefits, according to the report, there is a need for better information and coordinated action by governments and industry to reduce the growing risks to human health and the environment posed by the unsustainable management of chemicals worldwide.

The report recommends the use of economic instruments to create financial incentives for improving chemical safety, increased government capacity for chemical regulation and clear and consistent public information on the hazards and uses of specific chemicals.

Regarding the illegal trade in wildlife, the report states that data from the Convention on International Trade in Endangered Species (CITES) monitoring programme showed that 2011 had the highest level of poaching since records began in 2002. Early indications suggest that the number of elephants that were killed in 2012, ran, as in 2011, into the tens of thousands, while a record 668 rhinos were poached in South Africa that year.

CITES and its partners are supporting the strengthening of national enforcement capacities to fight wildlife crime. UNEP and CITES are also launching a campaign aimed at reducing demand for products from the illegal wildlife trade. 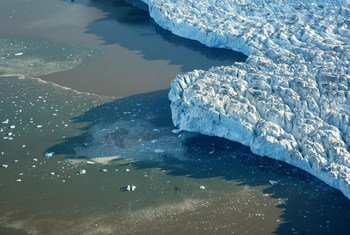 28 November 2012
Temperatures this year are the ninth highest on record since 1850 despite the effect of La Niña, a meteorological phenomenon which is supposed to have a cooling influence on the Earth’s atmosphere, says a new United Nations report released today.