Shareef Sarhan/UNRWA
Living conditions continue to deteriorate in Gaza and West Bank under the blockade.

14 February 2013
The United Nations agency assisting Palestinian refugees today launched an emergency appeal for just over $300 million to provide vital aid to the most disadvantaged in the Gaza Strip and the West Bank.

The United Nations agency assisting Palestinian refugees today launched an emergency appeal for just over $300 million to provide vital aid to the most disadvantaged in the Gaza Strip and the West Bank.

The largest component of the appeal – $78 million – is for food assistance to nearly three quarters of a million impoverished beneficiaries in Gaza, which has been under an Israeli blockade for six years, said a news release issued by the UN Relief and Works Agency for Palestine Refugees in the Near East (UNRWA).

“As political leaders and donors are called upon to respond to new disasters around the globe, the man-made humanitarian crisis right here in Gaza and in the West Bank remains and intensifies with no sign of abating after more than six decades,” UNRWA’s Deputy Commissioner-General, Margot Ellis, said at the launch event in Gaza.

The appeal will also fund temporary job creation and a cash assistance programme, as well as community mental health programmes, emergency health interventions and water and sanitation initiatives in Gaza and the West Bank.

The Director of UNRWA’s Department of Relief and Social Services, Martha Myers, said that Palestinians have “moved from being a second world country over the past 30 years to being a third world country in Gaza and outside the bubble of Ramallah in the West Bank.

“The descent continues unabated with the ability to produce and innovate stifled by the blockade – ruining lives, undermining a society and hope of political harmony, and debilitating the chances of a positive outcome.”

Israel imposed the blockade on Gaza for what it called security reasons after the Hamas group, which does not recognize Israel’s right to exist, ousted the Fatah movement from the Strip in 2007. 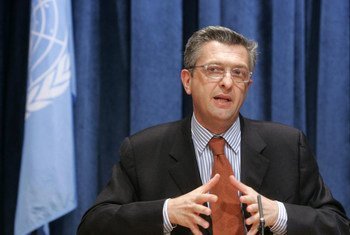 5 October 2012
The European Commission will contribute 11 million euros (about $14.3 million) to support the work of the United Nations assisting Palestinian refugees in Syria, Lebanon and the occupied Palestinian territory, the UN agency charged with these tasks said today.