13 February 2013
Secretary-General Ban Ki-moon today called for increased cooperation between the United Nations and the Organization of American States (OAS), stressing that the Americas have much experience and knowledge to contribute to the world.

“Global influence of the Americas as a whole is on the rise,” Mr. Ban said in his remarks to the OAS Permanent Council in Washington, D.C. “Many economies in the region are growing. Democratic institutions are strengthening. You are expanding your role as a bridge between the nations of North and South as well as among the South.”

Mr. Ban praised the region’s efforts to curb nuclear proliferation, stating that the Treaty of Tlatelolco, which bans all nuclear weapons in Latin America and the Caribbean, is a model for the world to follow.

“Today more than 110 countries are covered by nuclear-weapons-free-zones. With your help, we can make it all 193 UN Member States – and that can begin with the long overdue entry into force of the Comprehensive Nuclear-Test-Ban Treaty,” Mr. Ban said.

The Treaty bans all nuclear explosions in all environments, for military or civilian purposes. It was adopted by the General Assembly in September 1996 but has not yet entered into force.

Mr. Ban underlined that in an increasingly integrated world, cooperation between the UN and regional organizations is not just an aspiration but a necessity, and said both organizations must continue to ensure their partnership, drawing on their comparative advantages to be successful.

Countries in the Americas can take on a greater role in the UN by sharing their experiences on transitional justice to many Arab nations that are now transitioning from conflict to peace and to democracy from authoritarian rule.

“Your experiences in democratic transitions have benefited the region and hold valuable lessons far beyond,” he said.

“In the wake of the Arab Spring, the UN has provided a space for several countries of the Americas to share their experiences on democratic transitions with the countries of the Middle East and North Africa. We can and should build on this important work.”

Mr. Ban reiterated the UN’s commitment to help the Americas combat transnational organized crime and drug trafficking in particular, which are “causing enormous fear for personal safety and fuelling rising levels of violence, including some of the highest homicide rates in the world.”

The Secretary-General also encouraged the region to address inequality in its countries, which hinders security and sustainable development.

“Your economies showed tremendous resiliency in the face of the 2008 financial crisis. But structural problems persist. Inequality runs deep, and we know inequality feeds instability.”

Creating jobs, increasing productivity and implementing more sustainable patterns of production with the participation of women, youth and indigenous people will be crucial to tackle not just inequality but environmental issues.

“This region has great potential to strengthen the global partnership for development,” Mr. Ban said. “You are crucial to leading us all to a better world of dignity, prosperity, opportunity and social justice.”

During his visit to Washington D.C., Mr. Ban also addressed members of the Global Leadership Coalition – an organization formed by a coalition of 400 American businesses, foreign policy experts, civil society organizations and community leaders – and encouraged its members to engage with the UN in its initiatives to achieve sustainable development.

“In this globalized and interconnected world, I am always looking for leaders – whether they are from the government or the private sector – who can see the big picture – and take decisions that go beyond the narrow boundaries of short-term interests,” Mr. Ban said.

“I firmly believe it is in the national interest of all countries to work together for global solutions to global problems.”

Mr. Ban also met with members of the Committee on Foreign Relations of the United States Senate, including Senators Robert Menendez and Bob Corker, with whom he discussed the situation in Syria, the Democratic People’s Republic of Korea (DPRK), Iran, Mali and the Sahel, among others. 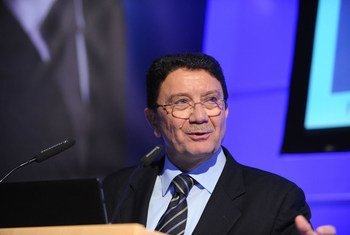 28 January 2013
The Americas along with Asia and the Pacific were found to be the most ‘open’ regions for tourists in terms of requiring a visa to visit their countries, while European destinations had higher visa restriction levels, according to a United Nations study released today.