UN Photo/Mark Garten
Secretary-General Ban Ki-moon at one of the studios of UN Radio.
13 February 2013

United Nations officials have hailed the enduring and transformative power of radio, not only as a means of sharing information with millions of people worldwide but also as a tool for shaping a more peaceful and sustainable future.

“More than ever, radio remains a force for social change, by sharing knowledge and providing a platform for inclusive debate,” Irina Bokova, Director-General of the UN Educational, Scientific and Cultural Organization (UNESCO), said in her message for World Radio Day.

In 2011 the UNESCO General Conference proclaimed 13 February as World Radio Day, the day United Nations Radio was established in 1946. Radio is the most prevalent mass medium, with the ability to reach up to 95 per cent of the world's population.

Ms. Bokova noted that the world has changed dramatically since the birth of radio in the 19th century. “But radio has hardly aged a day. It remains widely accessible, relatively cheap and very simple to use. It is still the medium that can carry any message to any place at any time – even without electricity.”

Radio has also embraced the digital revolution to expand its power and reach, she said. Across the world, the cost of broadcasting is decreasing and the number of radio stations is increasing. Citizen journalists and community media are using online radio stations to give voices to those who are rarely heard.

“In a world changing quickly, UNESCO is committed to harnessing the full power of radio to build bridges of understanding between peoples, to share information as widely as possible and to deepen respect for human rights and fundamental freedoms, especially freedom of expression,” said Ms. Bokova.

The agency is also determined to make full use of community radio to address poverty and social exclusion at the local level and to empower marginalized rural groups, young people and women, she added.

“Radio has transformed our past – it remains a powerful force for shaping a more peaceful, more sustainable and more inclusive future for all.”

In his message for the Day, Secretary-General Ban Ki-moon said that, from short-wave to FM to satellite transmission, radio connects people wherever they are.

“Since its invention more than 100 years ago, radio has sparked the imagination, opened doors for change, and served as a channel for life-saving information. Radio entertains, educates, and informs.”

He highlighted the fact that radio is both valuable and cost-effective, and that, from day one, the UN has been using radio to reach the peoples of the world.

“UN Radio sheds light on all issues on the United Nations agenda – from sustainable development to the protection of children to peacekeeping and conflict prevention. We are proud of our rich history of radio production in many languages, and the innovative ways we use radio to inform and serve the world.

“On this World Radio Day, let us celebrate the power of radio and let us work together to tune the world to the frequency of peace, development and human rights for all.”

♦ Receive daily updates directly in your inbox - Subscribe here to a topic.
♦ Download the UN News app for your iOS or Android devices.
radio 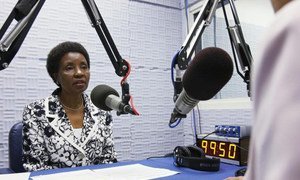 The role of radio as a facilitator of education, freedom of expression and public debate will be celebrated as World Radio Day is observed for the first time on Monday by the United Nations Educational, Scientific and Cultural Organization (UNESCO).