The Security Council and top United Nations officials have strongly condemned the nuclear test carried out by the Democratic People’s Republic of Korea (DPRK), warning that it constitutes a threat to international peace and security.

Following an emergency closed-door session, the Council said the test is a “grave violation” of relevant resolutions adopted by the 15-member body.

“In line with this commitment and the gravity of this violation, the members of the Security Council will begin work immediately on appropriate measures in a Security Council resolution,” Kim Sung-hwan, Foreign Minister of the Republic of Korea, which holds the rotating presidency of the Council for February, said in a statement read out to the press.

Secretary-General Ban Ki-moon, in a statement issued by his spokesperson overnight, called Pyongyang’s action “deplorable,” and voiced concern at its impact on regional stability.

Mr. Ban reiterated his criticism ahead of a pre-planned address to the Council. “I strongly condemn Pyongyang’s reckless act, which shows outright disregard for the repeated call of the international community to refrain from further provocative measures. The test is a clear and grave violation of the relevant resolutions of the Security Council.”

Underlining that he personally had repeatedly called on the new leadership in Pyongyang to give up its nuclear weapons, and try to diffuse the situation through political dialogue and confidence-building measures with neighbours and the international community, Mr. Ban said that “regrettably, my appeals have fallen on deaf ears.”

“It is deplorable that Pyongyang has chosen the path of defiance,” he added, urging the Council to act and speak in a unified matter.

A test would be a violation of sanctions imposed on DPRK by the Council following nuclear tests in 2006 and 2009, including a ban on the import of nuclear and missile technology. The sanctions were further tightened last month in a unanimous decision by the Council after DPRK reportedly launched a long-range Unha-3 rocket from its west coast in December 2012.

The Comprehensive Nuclear-Test-Ban Treaty Organization (CTBTO) today confirmed that its monitoring stations picked up “evidence of an unusual seismic event” that has “explosion-like characteristics and its location is roughly congruent with the 2006 and 2009 DPRK nuclear tests.”

CTBTO Executive Secretary Tibor Tóth said in a statement that, if confirmed, the nuclear test would constitute “a clear threat to international peace and security.”

Also today, the head of the International Atomic Energy Agency (IAEA) called the test “regrettable” and “in clear violation of the Security Council.”

In a statement, the Agency’s Director General, Yukiya Amano, urged DPRK to implement all relevant resolutions from the Security Council and the IAEA Board of Governors, and reiterated the need to resume IAEA nuclear verification activities in the country as soon as a political agreement is reached. 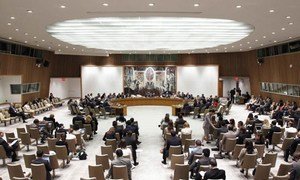 Reiterating its condemnation of a December 2012 missile launch by the Democratic People’s Republic of Korea (DPRK), the United Nations Security Council today more sharply targeted sanctions on that country, while again demanding an end to its nuclear and ballistic tests.