11 February 2013
South Sudan will be the first State to adopt a new United Nations-backed initiative aimed at creating a free and safe environment for journalists and media workers, the UN envoy to the country has announced.

In a press statement released on Sunday, the Special Representative of the Secretary-General for South Sudan, Hilde F. Johnson, applauded the Government’s decision to implement the UN Plan of Action on the Safety of Journalists as a step forward in the right direction towards greater protection of media workers in the country.

“The United Nations Mission in South Sudan (UNMISS) welcomes the Government’s decision to increase the safety of journalists in the country and address the issue of impunity,” Ms. Johnson stated.

As endorsed by the UN Chief Executives Board in April 2012, the new action plan’s global overview outlines a series of activities to be put into practice including: helping governments develop laws on safeguarding journalists; raising awareness so that citizens understand the damage done when a journalist’s rights to freedom of expression is curtailed; providing training courses for journalists in safety; establishing real-time emergency response mechanisms and strengthening the safety of journalists in conflict zones, among others.

It also calls for enhancing protection for women journalists in response to the increasing incidence of sexual harassment and rape, decriminalizing defamation offences and encouraging adequate remuneration for full-time and freelance employees.

The particular plan to be implemented in South Sudan will be developed by UNMISS, UNESCO and the Office of the UN High Commissioner for Human Rights (OHCHR) in conjunction with other UN agencies.

Ms. Johnson also underscored the UN’s need to freely carry out its mandate without any interference from local authorities. In a recent incident, two UNMISS human rights staff were interrogated following their inquiries into the condition of a detained local journalist.

“For UNMISS and other UN agencies to be able to support the Government in upholding its commitments under the action plan for the safety of journalists, it is imperative that our mandate and diplomatic immunities are respected fully,” she continued.

Late last year, the UN Educational, Scientific and Cultural Organization (UNESCO) – the UN body tasked with issues related to press freedom – highlighted the fact that more than 100 journalists around the world were killed in 2012, making it the deadliest year for media since the agency began keeping records on the issue.

In South Sudan alone, UNMISS reported that the country has dropped 12 places in a recent ranking and press index calculated by Reporters without Borders due, in part, to the “heavy handedness by security forces in dealing with journalists.” 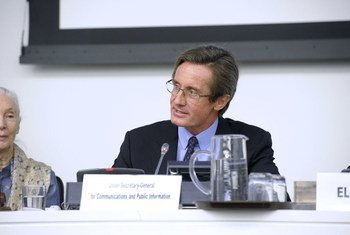 23 November 2012
During a United Nations-led meeting in Vienna, the world body and its partners today renewed their pledge to improve safety for journalists and prosecute those who commit acts against them through a new plan to protect media workers.