The Government of Sudan and one of the main rebel factions in Darfur have signed a ceasefire agreement to move the peace process forward, the United Nations-African Union mediator announced today.

The Government of Sudan and one of the main rebel factions in Darfur have signed a ceasefire agreement to move the peace process forward, the United Nations-African Union mediator announced today.

“This is a major breakthrough in the road towards a comprehensive and lasting peace accord in Darfur,” said Aïchatou Mindaoudou, who is also the Acting Joint Special Representative in the UN-AU peacekeeping mission in Darfur (UNAMID).

The Government, represented by State Minister and Head of the Darfur Follow-up Office, Amin Hassan Omer, signed the ceasefire with Arko Sulaiman Dahiya, Vice Chairman and Head of Delegation from the Justice and Equality Movement (JEM), on 10 February in Doha, Qatar.

The agreement now lays the groundwork to start negotiations on other substantive issues, such as power and wealth-sharing and return of internally displaced persons and refugees.

The negotiations for the ceasefire had begun last month in Qatar under the parameters set in the Doha Document for Peace in Darfur (DDPD). The DDPD forms the basis for a permanent ceasefire and comprehensive peace agreement to end the fighting that began in Darfur ten years ago, pitting government forces and allied militiamen against rebel groups.

JEM is the second rebel group to commit to the DDPD, after the Liberation and Justice Movement (LJM) signed it last year.

Following the signing, Ms. Mindaoudou congratulated both parties and said she hoped that the agreement would attract the non-signatory movements to join in the peace process.

“The road to peace is challenging and needs a great deal of resolve, perseverance and concessions from both sides,” said Ms. Mindaoudou, reiterating her commitment to continue to work with the parties to the conflict towards achieving a comprehensive peace in Darfur. 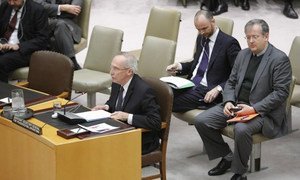 While the government and one of the main rebel factions in the Sudanese region of Darfur have agreed on an agenda for negotiating a comprehensive peace, the international community must keep all of the parties focused on resolution of the conflict, a senior United Nations official told the Security Council today.