Humanitarian access is improving in Mali but the situation remains volatile, a senior United Nations relief official said today, warning that an estimated 10 million people in the wider Sahel region could be at risk of starvation this year.

“This crisis in the north [of Mali] is coming on top of a broad, chronic crisis across the Sahel in which millions of people are being affected by food insecurity,” David Gressly, Regional Humanitarian Coordinator for the Sahel, told reporters in Geneva.

The Sahel region in West Africa consists of Mali, as well as Burkina Faso, Chad, Mauritania, Niger, Senegal, Gambia, Cameroon and Nigeria. The humanitarian community has appealed for over $1.6 billion to help millions in need in the region.

In Mali, about half a million people are food insecure and more than 4.3 million people are in need of humanitarian aid after fighting broke out in January 2012 between Government forces and Tuareg rebels. The conflict uprooted thousands of people and prompted the Malian Government to request assistance from France to stop the military advance of extremist groups.

The UN is also concerned about the protection of civilians on the ground, Mr. Gressley told UN Radio, noting that there have been unproven allegations of abuses in northern Mali.

In recent weeks, the military efforts reasserted Malian control in the centre and north of the country, allowing humanitarian access to improve. Domestic UN humanitarian flights have resumed and need assessments are underway in Gao, Kidal, Mopti and Segou.

Despite the improvements, access to northern Mali remains limited. Reports of landmines and improvised explosive devices (IED) have shut down sections of major truck routes and the Algerian border is closed.

Just back from Mali, Mr. Gressly said the UN is simultaneously working to prepare for the people who may want to return, while also preparing for those who continue to be displaced or living outside the Syrian border.

“I suspect that the moment the transport routes are secured, people will begin moving home. Returnees will take longer because there are reasons they left the country instead of moving south-ward.”

UN aid workers are adapting to the changing conditions on the ground, Mr. Gressly said.

“So far in most of the countries the [military] intervention has not had an impact on our work on the ground,” he said of the Sahel region.

“We continue to have access there in all the countries concerned but we have to be prepared for the possibility that that could change over time. We will continue to see how we can secure our humanitarian personnel and action, if the situation were to worsen,” Mr. Gressly said.

Last month, the Secretary-General’s Special Representative for West Africa, Said Djinnit, told the UN Security Council that the ongoing crisis in Mali is having far-reaching effects in West Africa and the Sahel. 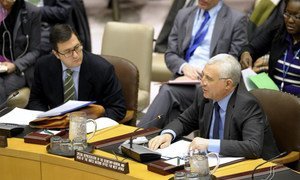 The ongoing crisis in Mali is having far-reaching effects in West Africa and the Sahel, a United Nations envoy said today, stressing that the situation there illustrated the fragility of the region.