The United Nations mission in Libya has welcomed today’s decision by the General National Congress on the formation of the body that will be tasked with drafting the country’s new constitution.

The General National Congress decided to endorse election as the process by which the members of the Constituent Assembly will be chosen. Once formed, the Assembly will draft the constitution – the next phase of the country’s transition toward a modern democratic State, after decades of autocratic rule and the toppling of the regime of Muammar al-Qadhafi in 2011.

“This decision is an important milestone, paving the way for continued progress toward a constitution that reflects the needs, priorities, and aspirations of the Libyan people,” said Tarek Mitri, the Secretary-General’s Special Representative and head of the UN Support Mission in Libya (UNSMIL).

“We hope that the General National Congress moves swiftly to adopt the legal framework necessary for free, fair, and inclusive elections of the Constituent Assembly,” he added in a news release.

Mr. Mitri emphasized that UNSMIL stands ready to assist the Libyan authorities throughout the electoral process at their request. 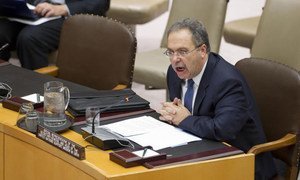 While the new Government of Libya has evinced determination to tackle the many challenges faced by the nascent democracy, national dialogue must be held so that difficult decisions on a range of issues can be taken with broad popular support, a United Nations envoy said today.