Six-year-old Asmah Mohamad, who was forced to undergo the painful FGM/C procedure, is is comforted by her mother Bedria. © UNICEF/NYHQ2005-2229/Getachew

In 29 countries in Africa and the Middle East, where FGM/C is concentrated, 36 per cent of girls between the ages of 15 and 29 have been cut compared to an estimated 53 per cent of women between 45 and 49, according to the latest data released by the UN Children’s Fund and the UN Population Fund (UNFPA) on the occasion of the International Day of Zero Tolerance to FGM/C, observed on 6 February.

The decline is particularly sharp in countries such as Kenya, where women are three times more likely to have been cut than girls.

“This progress shows it is possible to end FGM/C,” said UNICEF Executive Director Anthony Lake. “FGM/C is not only deeply wrong, we can and must end it to help millions of girls and women lead healthier lives.”

FGM/C refers to a number of practices which involve cutting away part or all of a girl’s external genitalia. The practice – recognized globally as a violation of the human rights of girls and women – has no health benefits, causes severe pain and has several immediate and long-term health consequences, according to UN agencies.

The new estimates follow the adoption of a UN General Assembly resolution in December 2012 calling on Member States to intensify efforts toward the complete elimination of FGM/C. In addition, some 1,775 communities across Africa publicly declared their commitment to end FGM/C last year.

Since 2008, when the UNFPA-UNICEF Joint Programme on FGM/C was established, nearly 10,000 communities in 15 countries, representing about 8 million people, have renounced the practice.

“Empowered women and girls are key to breaking the cycle of discrimination and violence and for the promotion and protection of human rights, including sexual and reproductive health and reproductive rights,” said the Executive Director of UNFPA, Babatunde Osotimehin. “Working with governments and civil societies, UNFPA and UNICEF have successfully implemented a human rights-based and culturally-sensitive approach to ending FGM/C.”

While progress has been made, the World Health Organization (WHO) warned that some 3 million girls are at risk every year and 140 million have been affected by the practice. This year, the agency is also focusing on addressing the trend of health-care providers being the ones performing FGM/C and thereby contributing to legitimize the practice.

“There is no justification for causing harm to a child. Female genital mutilation is a violation of the fundamental rights of girls that threatens their health and future opportunities, including giving birth later in life,” said the Deputy Special Representative of the Secretary-General in Iraq, Jacqueline Badcock, in a statement to mark the Day.

Eight per cent of women aged 15-49 in Iraq have experienced some form of FGM/C when they were girls. The vast majority of them live in the northern governorates of Erbil, Sulaimaniyah and Kirkuk, according to a news release issued by the UN Assistance Mission for Iraq (UNAMI).

“We call on both the Government of Iraq and the Kurdistan Regional Government to take bold new actions to change this harmful practice that affects the well-being of hundreds of thousands of girls today,” Ms. Badcock said. 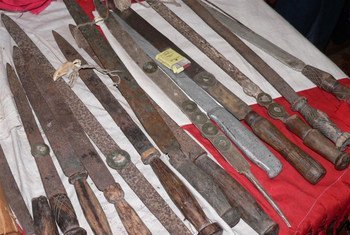 28 November 2012
United Nations Member States have approved the first-ever draft resolution aimed at ending the harmful practice of female genital mutilation, in a move hailed by Secretary-General Ban Ki-moon as a major step forward in protecting millions of women and girls.