The report, produced by the International Labour Organization (ILO) and the UN Development Programme (UNDP), stresses that countries in the region must pay attention in particular to the social consequences of their economic policies, as the recent uprisings against various Arab governments have exposed a lack of social protection and dialogue between citizens and authorities.

“The real issue is the need for jobs with social dignity rather than jobs that come at the expense of dignity,” said Mohammad Pournik, Poverty Practice Leader at the UNDP Regional Centre in Cairo, Egypt, noting that one of the demands of Arab youth is having jobs without the need for intermediaries or connection, known as “Wasta.”

According to the report, “Rethinking Economic Growth: Towards Inclusive and Productive Arab Societies,” the Arab region had the lowest productivity growth rate of any world region between 2000 and 2010 except Latin America, with 1.5 per cent for North Africa and 1.2 per cent for the Middle East against a world average of 1.8 per cent.

Policies pursued over the past two decades enabled countries in the region to tackle debt and inflation and create jobs, but growth lagged behind the rest of the world, and new jobs were concentrated in low productivity sectors. Meanwhile, the private sector remained among the least competitive globally due to low rates of investment, a poor regulatory environment, and widespread nepotism and corruption.

“In 2010, Arabs were more likely to find work than they were two decades ago,” said the lead author of the report, Zafiris Tzannatos. “But the question is what type of work? Workers were increasingly educated but the jobs being created were low-skilled and low-paid. In most countries, workers could not make their voices heard through trade unions or the ballot box.”

The report argues that economic growth in the next decade hinges on good governance, which must improve to attract investment and enable structural and institutional reforms.

“Arabs need an inclusive development model that is grounded in social justice,” said the ILO’s Regional Director for the Arab States, Nada al-Nashif. “This requires macro-policy coherence that can enhance productivity and wages, reformed labour relations to enable workers and employers to participate effectively in decision-making, and expanded social protection systems that provide employment and livelihoods security.” 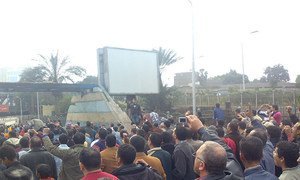