“Your Members Day has brought you here to the halls of diplomacy and international negotiations. But you, too, are ambassadors in your own right,” Mr. Eliasson told nearly 600 UNA-USA members and guests gathered at UN Headquarters in New York.

“You are special envoys of the United Nations, representing us in your communities, helping to advance our values and objectives,” he added, a nod to this year’s theme for Members’ Day: ‘The US at the UN: Opportunities for Renewal.’

Focusing on specific aspect of his work, Mr. Eliasson named Syria and Mali as the two issues occupying most of his time in the area of peace and security.

“Syrians are divided, the region is divided, and very seriously, the Security Council is divided. And inside Syria, the fighting continues,” he said, adding that the Joint Special Representative of the UN and the Arab League, Lakhdar Brahimi, was working very hard to get the parties to agree to a negotiated transition.

Meanwhile, the humanitarian situation in Syria worsens. Almost four million people are at risk with more than 700,000 having fled to neighbouring countries.

“There is also a risk that the hostilities could take on more serious ethnic and sectarian dimensions, with revenge and reprisal killings,” Mr. Eliasson cautioned.

The international community pledged $1.5 billion to assist the humanitarian crisis in the country at a conference last week in Kuwait. “This will ease some of the suffering. But what is really needed is an end to the violence and a political solution,” noted the UN official.

On Mali, Mr. Eliasson, who visited the capital city of Bamako last year, said the French-led intervention at the request of the Government of Mali has improved the living situation but it is still fragile and uncertain. He warned that the crisis could develop through a dangerous combination of poverty, drought, weak institutions, terrorism and organized crime.

During the visit, Mr. Eliasson met with women’s organizations and got a “very depressing picture of the appalling human rights violations” in the northern part of the country, including sexual violence, and the desecration of cultural and religious sites.

A report by the Office of the UN High Commissioner for Human Rights (OHCHR) released last month details rights violations occurring since January 2012, when fighting between Government forces and Tuareg rebels broke out in the country’s north, later resulting in radical Islamists seizing control of the area. The Prosecutor of the International Criminal Court (ICC) has since opened an investigation.

Violence again women is one of the human rights issues on which the UN plans to continue focusing attention, along with broader work to promote mutual respect, tolerance and understanding in a time of polarization and ethnic and religious tensions around the world, Mr. Eliasson said.

In terms of development, UN is focusing on accelerating work towards achieving the anti-poverty targets known as the Millennium Development Goals (MDGs) by the 2015 deadline, he stated.

While praising the MDGs for proving to be a successful framework for international development, and for rallying governments, civil society and the private sector around a common agenda, Mr. Eliasson noted that progress on the Goals has been uneven among and within countries and inequalities have increased.

“More than 3,000 children under the age of five die every day from diarrhoea, dysentery, dehydration and cholera. I have seen them die in front of my own eyes – in Sudan, Somalia and other places,” Mr. Eliasson said, highlighting the target which has seen the least progress: sanitation.

There are 783 million people who do not have access to clean or relatively safe water and 2.5 billion people – roughly 37 per cent of the world population – lack access to toilets.

“Our objective must be to eradicate extreme poverty in our lifetime, promote equitable economic opportunity for all and protect the environment. For this to happen, we must be reminded of the role of respect for human rights and the rule of law,” Mr. Eliasson said.

The UN provides “very active rule of law assistance and efforts,” he stated, noting work being done to develop a functioning criminal justice chain, on land and property rights, and on promoting birth registration and reducing statelessness.

Last September, the General Assembly held its first-ever high-level meeting on the rule of law with the participation of all 193 Member States.

The Members’ Day coincided with the centennial of the birth of Rosa Parks, an African-American activist called “the mother of the freedom movement” in the US for refusing to sit in the back of a segregated bus.

♦ Receive daily updates directly in your inbox - Subscribe here to a topic.
♦ Download the UN News app for your iOS or Android devices.
syria|mali 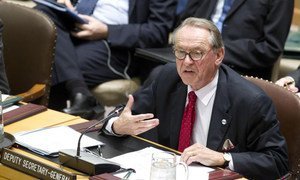 The Deputy Secretary-General today highlighted the need for measures that enhance the rule of law in conflict and post-conflict situations, stressing that more coordination at national and local levels is needed among United Nations entities to effectively support countries on this issue.