A multi-layered approach to countering hate speech that could incite genocide and other crimes against humanity is needed, given the limits of legislation and the imperative to preserve freedom of expression, the United Nations official dealing with the issue said today.

“It is important to balance the principle of freedom of expression with the need to prevent or stop the most extreme cases of hate speech – those that have the potential to incite mass violence,” Adama Dieng, UN Special Adviser on the Prevention of Genocide, told a panel on the topic.

Participants in the discussion at UN Headquarters in New York included the Ambassador of Norway, the UN Special Rapporteur on the Promotion and Protection of the Right to Freedom of Opinion and Expression, a fellow on genocide prevention at the United States Holocaust Memorial Museum, and experts on journalistic ethics and related issues.

The topic of genocide and incitement remained critical not only because of the importance of the issue in the founding of the UN after the Holocaust, but also because of the role of speech in the more recent atrocities in Rwanda and the former Yugoslavia and in the widespread violence triggered by the anti-Islam movie in 2012, participants agreed.

Mr. Dieng said he was about to leave for Kenya where, in the run-up to March elections, there have been numerous initiatives taken to try to prevent the kind of hate speech that contributed to the ethnic violence that followed the 2008 polls.

For an effective multi-layered approach, Mr. Dieng said, legislation must be complemented with fighting the root causes of hate speech – racism and discrimination – through dialogue and other measures, as well as countering it with “positive speech,” from government and civil society, while improving national and international early warning of build-up of hate, through the monitoring of new media.

Mr. Dieng, who was formerly the Registrar for the International Criminal Tribunal for Rwanda, said he personally witnessed the role that hate speech can play in instigating atrocities and conversely the role that prevention could play in stopping such crimes.

However, he cautioned, outlawing speech should be exceptional, since “incitement to ethnic, racial and religious hatred – the most extreme form of hate speech – usually happens only in extraordinary circumstances.”

The factors that make speech “dangerous,” as well as the dangerousness of hate speech had been identified in several initiatives, he said. These include the severity, content, extent, imminence, likelihood, and context of the speech.

In that context, he highlighted a seminar to be co-hosted by his office on 22 February that will aim to identify policy options for stopping and preventing incitement to atrocity crimes in situations where violence is imminent.

With the participation of the UN special rapporteurs on the freedom of opinion and expression; on the freedom of religion and belief; and on contemporary forms of racism, racial discrimination, xenophobia and related intolerance, the seminar is part of ongoing work to build on the 2012 Rabat Declaration.

The Rabat Declaration and corresponding Programme of Action are a result of regional workshops on countering “incitement to discrimination, hostility or violence,” organized by the Office of the High Commissioner for Human Rights (OHCHR) and adopted by experts meeting in Morocco in October 2012. 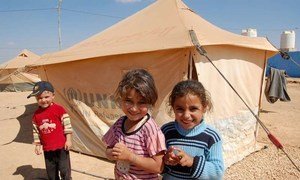 The United Nations top official on the issue of genocide has warned of the increasing risk of sectarian violence in Syria, and called on all parties to the conflict to refrain from targeting individuals or groups based on religious or ethnic identity.