1 February 2013
Secretary-General Ban Ki-moon has called on the followers of all faiths to work together to achieve common goals for peace, prosperity and physical and spiritual well-being, as he kicked off an annual event known as World Interfaith Harmony Week.

“We live in times of turmoil and transformation – economic, environmental, demographic and political. These transitions bring both hope and uncertainty. Our job is to ensure that hope wins, and our task will be made easier if the followers of all faiths collaborate in common cause,” Mr. Ban said in his message for the week.

“Let us never forget that what divides us is minuscule compared with what unites us. Working together, we can achieve all our goals for peace, prosperity and physical and spiritual well-being.”

World Interfaith Harmony Week is observed during the first week of February, as decided by the General Assembly, which established the event in 2010 as a way to promote harmony between all people regardless of their faith.

The Assembly encouraged all States, during the week, to support the spread of the message of Inter-faith harmony and goodwill in the world’s churches, mosques, synagogues, temples and other places of worship, among other steps.

“For billions of people around the world, faith is an essential foundation of life,” Mr. Ban noted. “It provides strength in times of difficulty and an important sense of community. The vast majority of people of faith live in harmony with their neighbours, whatever their creed, but each religion also harbours a strident minority prepared to assert fundamentalist doctrines through bigotry and extreme violence.

“These acts are an affront to the heritage and teachings of all major religions,” he stated, adding that they also contravene the Universal Declaration of Human Rights, which affirms the right of all to freedom of thought, conscience and religion.

“It is imperative that the moderate majority is empowered to stand firm against the forces of extremism. But, this can only be achieved through strong leadership,” he added.

The Secretary-General also cited the need to reach out to young people with a message of hope. “Too often marginalized, jobless and facing a future of uncertainty, youth can be easy prey for fanatics offering a sense of cause and community. We need to expose the invalidity of this lure and offer a compelling alternative.”

He also noted that next month at its forum in Vienna, the UN Alliance of Civilizations (UNAOC) will continue its efforts to unite faiths and cultures. “Whether on the world stage or in their communities, religious and cultural leaders have a responsibility to speak the language of tolerance and respect. This is a central message of World Interfaith Harmony Week,” said Mr. Ban.

The Alliance of Civilizations was set up in 2005, at the initiative of Spain and Turkey, under UN auspices, to improve understanding and cooperative relations among nations and peoples across cultures and religions, and to help counter the forces that fuel polarization and extremism.

Working in partnership with governments, international and regional organizations, civil society groups, foundations, and the private sector, the Alliance is supporting a range of projects and initiatives aimed at building bridges among a diversity of cultures and communities. 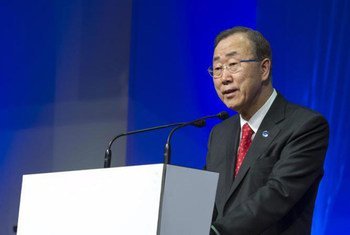 26 November 2012
United Nations Secretary-General Ban Ki-moon today highlighted the need for religious and political leaders to use their influence responsibly, while pointing out how recent events in places such as the Middle East and Mali drive home the need to “promote long-term mutual understanding.”