“Our innovative approaches to aid delivery, coupled with relatively favourable rains, has made a profound difference in the lives of people,” acting UN Humanitarian Coordinator for Somalia Stefano Porretti said today in a statement, citing recent data on food security from the UN Food and Agriculture Organization (FAO) and the Famine Early Warning Systems Network.

However Mr. Porretti, who is also the WFP Representative in Somalia, noted that “this is not the time to be complacent. In 2010, we saw similar marked improvements in the humanitarian situation. A year later, tens of thousands of people died in the famine.”

In July 2011, a six-month food crisis caused by low rainfall and a massive rise in food prices led to thousands of deaths and required a massive humanitarian aid programme.

Citing early forecasts for what is expected to be below-average rainfall during the April-to-June rain season, Mr. Porretti noted that malnutrition rates in Somalia are still among the highest in the world, with 215,000 children under five years of age acutely malnourished.

A consolidated appeal for Somalia requires $1.3 billion in 2013 for programming for immediate needs and to enhance resilience to prevent a crisis like the one in 2011.

“We need to continue helping people who have lost everything to get back into a productive life so that they can cope with future shocks, thereby lessening their dependence on aid,” Mr. Porretti said.

He added that that UN is pursuing innovative ways to reach the people in need, focusing on investing in prevention instead of spending in response to each new crisis.

“Now we have the best opportunity in 20 years to break the cycle of recurring humanitarian crises brought on by drought and conflict.”

Earlier in the week, WFP announced it had resumed food assistance in the port city of Kismayo more than four years after conflict and pervasive insecurity forced it to shutter its operations in southern Somalia. Relative peace is said to be returning to the country. On his recent trip to Somalia, Under-Secretary-General for Political Affairs Jeffrey Feltman said the country is “beginning to undergo profound transformation.” 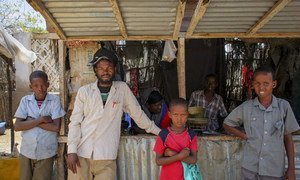 More than four years after conflict and pervasive insecurity forced it to shutter its operations in southern Somalia, the United Nations World Food Programme (WFP) has resumed food assistance to the region’s port city of Kismayo, the agency announced today.