In face of non-cooperation, UN calls on Israel to take part in human rights review

In face of non-cooperation, UN calls on Israel to take part in human rights review

29 January 2013
The top United Nations human rights body today voiced regret at Israel’s decision not to participate in the scheduled review of its human rights record, and called on the Government to resume its cooperation with the mechanism set up for this purpose.

The UN Human Rights Council’s Universal Periodic Review subjects each country’s human rights record to a State-led peer review on the basis of information submitted by the country concerned, UN entities, civil society and other stakeholders.

Israel today became the first country not to show up for its review, which is part of a two-week session the Council is currently holding in Geneva during which 14 States are having their human rights records examined.

Representatives of the 14 countries are scheduled to come before the Working Group, which comprises the entire membership of the 47-member Council, to present efforts they have made in fulfilling their human rights obligations and commitments, assessing both positive developments and identifying challenges.

In the face of Israel’s absence, the Council took a decision by consensus “regretting the decision of Israel, the State under review, not to participate in the Universal Periodic Review at the scheduled date…”

It also decided to reschedule its examination of the country to later this year, at the 17th session of the Working Group of the Universal Periodic Review of October-November at the latest.

In addition, the Council called on Israel to resume its cooperation with the Universal Periodic Review mechanism, which has enjoyed 100 per cent participation from States since it began nearly five years ago.

The decision called on the President of the Council, Ambassador Remigiusz A. Henczel of Poland, to “take all appropriate steps” to encourage Israel to resume its cooperation and requested him to report back to the Council on his efforts in this regard.

“When my final report is considered, the Council will consider any steps that might be deemed appropriate under the relevant General Assembly and Human Rights Council resolutions,” said Mr. Henczel.

He added that today’s decision would serve as “a precedent to be applied in all similar circumstances of non-cooperation in the future.”

The other countries being reviewed during the Working Group’s current session, which concludes on 1 February, are France, Tonga, Romania, Mali, Botswana, Bahamas, Burundi, Luxembourg, Barbados, Montenegro, the United Arab Emirates, Liechtenstein and Serbia. 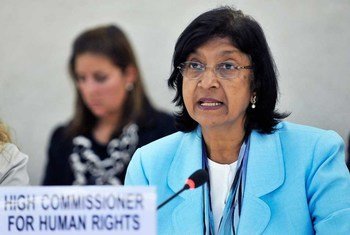 13 October 2011
The Human Rights Council completed its first review of the records of every Member State on Thursday, with Haiti being the last country to be considered in the process, which examined records of each State for the past four years.