29 January 2013
The United Nations Food and Agriculture Organization (FAO) today warned that the world is at risk of a repeat of the disastrous bird flu outbreak seen six years ago unless countries step up global health measures to monitor and control this and other dangerous animal diseases.

The United Nations Food and Agriculture Organization (FAO) today warned that the world is at risk of a repeat of the disastrous bird flu outbreak seen six years ago unless countries step up global health measures to monitor and control this and other dangerous animal diseases.

“The continuing international economic downturn means less money is available for prevention of H5N1 bird flu and other threats of animal origin. This is not only true for international organizations but also countries themselves,” said FAO Chief Veterinary Officer Juan Lubroth.

“Even though everyone knows that prevention is better than cure, I am worried because in the current climate governments are unable to keep up their guard.”

Since 2003, the H5N1 Highly Pathogenic Avian Influenza virus has killed or forced the culling of more than 400 million domestic poultry and caused an estimated $20 billion in economic damage. Although it does not infect humans often, about 60 per cent of those infected with the virus die. Between 2003 and 2011, it infected over 500 people and killed more than 300, according to the World Health Organization (WHO).

Large reservoirs of the H5N1 virus still exist in some countries in Asia and the Middle East, in which the disease has become endemic. Without adequate controls, it could easily spread as it did in 2006, when 63 countries were infected, FAO said in a news release.

“I see inaction in the face of very real threats to the health of animals and people,” Mr. Lubroth said, adding that in spite of budget restrictions, countries must invest in preventing the disease to avoid further economic damages.

Appropriate measures can completely eliminate H5N1 from the poultry sector. Domestic poultry are now virus-free in most of the places infected in 2006, including Turkey, Hong Kong, Thailand and Nigeria. In addition, substantial headway has been made against bird flu in Indonesia, after many years of work and international financial commitment.

FAO warned that another growing threat is Peste des Petits Ruminants, or PPR, a highly contagious disease that can decimate flocks of sheep and goats.

“It is currently expanding in sub-Saharan Africa – causing havoc in the Democratic Republic of Congo among other countries – and is just starting to spill over into southern Africa,” Mr. Lubroth said. “The irony is that a perfectly good vaccine exists for PPR, but few people are using it.”

Some of the reasons for not using the vaccine include tight finances, lack of political will, and poor planning and coordination. To address these, governments must invest in prevention means such as improving hygiene practices, market and border controls, and health security in farms and markets. Countries must also equip laboratories, train staff to diagnose the disease and respond to outbreaks, and organize efficient extension services to serve farmers’ needs.

“We need to come together to find ways to ensure the safety of the global food chain,” Mr. Lubroth said. “The costs – and the dangers – of not acting are just too high.” 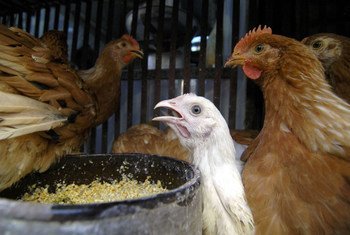 30 December 2011
The United Nations health agency has voiced deep concern that scientific research undertaken on a strain of highly pathogenic influenza could have negative consequences but also acknowledged that tightly-controlled studies needed to continue to limit the possibility of future risks to the global population.