28 January 2013
United Nations Secretary-General Ban Ki-moon, praising regional and national leaders for striving to improve conditions for the people of Africa, urged the step-up of efforts to reach agreed development goals as he touched on a range of issues in Addis Ababa today.

“I see Africa on the rise. I welcome great progress on development, good governance and human rights,” Mr. Ban told correspondents on the sidelines of the African Union Summit in Ethiopia, during a day devoted to security in the Great Lakes, malaria, poverty and a gamut of other issues.

“We have 1,000 days to reach our Millennium Development Goals,” Mr. Ban said of the time remaining until the 2015 deadline for the programme to slash extreme poverty and a raft of other global ills. “Now is the time to finish the job by accelerating progress,” he urged.

Affirming the UN’s continued commitment to support those efforts, he added: “The United Nations has been Africa’s strongest partner throughout this half century. We are firmly committed to standing with Africa now in the future.”

Mr. Ban said that he had “very successful” meetings today on malaria and yesterday on maternal and child health, recalling that this week also saw the launch of an initiative to help Africa train and deploy a million community health workers by 2015.

“We are working for a future where virtually all African mothers survive childbirth and raise their HIV-free babies into healthy adults,” he said.

He added that women must play a significant role in peacebuilding in conflict societies. “The African Union took an historic step when it appointed its first female Chairperson,” he said, congratulating Nkosazana Dlamini-Zuma of South Africa on her appointment.

Commenting on a range of African conflict situations, Mr. Ban welcomed what he called the “decisive action” of the French Government in Mali and pledged the UN’s readiness to undertake a “major, system-wide effort” for peacebuilding, governance, security sector reform, physical reconstruction and regional cooperation for the Sahelian country.

While in Addis, Mr. Ban met with some 20 national leaders. In a meeting today with Boni Yayi, President of Benin, he commended Mr. Yayi on his accomplishments as outgoing President of the AU and discussed regional initiatives to fight piracy in the Gulf of Guinea, according to information provided by Mr. Ban’s spokesperson.

The spokesperson said that in his meeting with Somali President Hassan Sheikh Mohamud, the Secretary-General welcomed progress in the country and discussed the future of the UN presence there, encouraging the Government to strengthen its political authority throughout its territory.

With the President of the Democratic Republic of the Congo (DRC), Joseph Kabila, he commended efforts to find a durable solution to the crisis in the east of the country, reaffirming the UN’s commitment to address remaining challenges. He also discussed the situation in the Great Lakes region with Rwandan President Paul Kagame and Ugandan President Yoweri Kaguta Museveni, in separate meetings.

The Secretary-General noted that leaders had planned to sign a political framework on the DRC earlier today. There were no fundamental differences over the content of the framework, but some procedural issues did arise, and the Secretary-General said that the parties have agreed to postpone the signing. 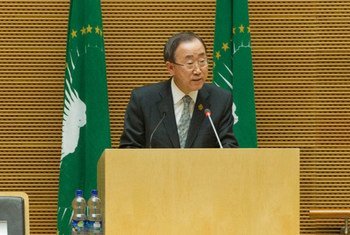 27 January 2013
Speaking at the African Union Summit in Addis Ababa, Ethiopia, Secretary-General Ban Ki-moon today called on the continent's leaders to boost efforts to lift millions out of poverty and end recurrent cycles of violence to accelerate development in the region.