The United Nations today announced it is working with Jordan and partners to open a second major refugee camp by the end of the month as the number of displaced Syrians continues to rise, with a record 30,000 people arriving to the neighbouring nation this month alone.

The United Nations today announced it is working with Jordan and partners to open a second major refugee camp by the end of the month as the number of displaced Syrians continues to rise, with a record 30,000 people arriving to the neighbouring nation this month alone.

“UNHCR is working with the Government of Jordan and partners to prepare a second major camp close to Za’atari, which will be known as Halabat camp,” the spokesperson for the UN High Commissioner for Refugees (UNHCR), Melissa Fleming, told reporters in Geneva. “Up to 5,000 people will be accommodated initially in the camp, with a plan to increase the capacity to 30,000 people.”

The recent influx of refugees represents a significant contrast with previous months, when some 16,000 arrived to Za’atari camp in December, 13,000 in November and 10,000 in October. UNHCR estimates that the population in the camp currently stands at 65,000 people.

“Staff at Za’atari are working day and night to respond to the new arrivals and the growing needs of the refugees in the camp,” Ms. Fleming said, adding that the agency is increasing its staffing for the camp and tens of thousands of tents are being delivered by truck along with relief items.

Za’atari camp has three hospitals, as well as several healthcare facilities, with some 51 specialists and 70 nurses in addition to general practitioners and paramedics. However, resources are being strained with the recent increase in arrivals. Over the past month, between seven and 10 babies were born each day in the camp, Ms. Fleming said.

In addition to people arriving to Za’atari, UNHCR is also registering refugees in Amman who are living in the city. “We hope to register over 50,000 refugees in urban settings by the end of February. A new registration centre in Irbid will open soon, further increasing our registration capacity,” Ms. Fleming said.

To date UNHCR has registered, or issued appointments to register, 206,630 Syrians in Jordan. According to the Government, there are over 300,000 Syrian refugees in the country.

During the same briefing, the Director of Emergency Programmes for the UN Children’s Fund (UNICEF), Ted Chaiban, said infrastructure inside Syria was being systematically destroyed, with restricted availability of water, and warned that many schools are now being used as shelters, leaving many children without education. 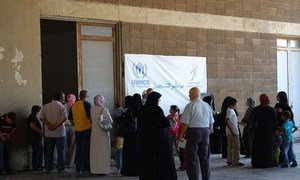 The United Nations refugee agency said today it is expanding humanitarian efforts to keep apace with the growing numbers of civilians fleeing the Syrian conflict and crossing into neighbouring countries, while warning that a lack of funding risked jeopardizing future assistance.