While the government and one of the main rebel factions in the Sudanese region of Darfur have agreed on an agenda for negotiating a comprehensive peace, the international community must keep all of the parties focused on resolution of the conflict, a senior United Nations official told the Security Council today.

“It is now imperative that the parties, including all the armed movements and the government of Sudan, cease their hostilities and become exclusively engaged in their working out their grievances through peaceful dialogue,” the Assistant Secretary-General for Peacekeeping Operations, Edmond Mulet, said during his briefing to the 15-member body on the Secretary-General’s latest report on the UN-African Union mission in Darfur, known by the acronym UNAMID.

Mr. Mulet said that the negotiations had begun in Doha, Qatar, on 20 January between the Government and the rebel group Justice and Equality Movement (JEM) and were being facilitated by the Deputy Joint Chief Mediator, Aïchatou Mindaoudou Souleymane, and the Qatari government.

The parties signed a framework agenda that would set the parameters for negotiations on the Doha Document for Peace in Darfur (DDPD). The DDPD forms the basis for a permanent ceasefire and comprehensive peace agreement to end the fighting that began in Darfur ten years ago, pitting government forces and allied militiamen against rebel groups.

JEM is the second rebel group to commit to the DDPD, after the Liberation and Justice Movement (LJM) signed it last year. Along with the Government of Qatar, UNAMID has been heavily involved in mediation efforts in the Darfur conflict, and recently organized a workshop on negotiation skills for the JEM delegation.

On implementation of the DDPD, Mr. Mulet said that the Council of the Regional Authority for Darfur, an oversight body required in the agreement, had been formally inaugurated on 16 January following the appointment of most of its membership.

During the inauguration, senior Sudanese Government officials had reiterated Khartoum’s commitment to the Darfur peace process and had also announced a parliamentary allocation of some $181 million to support relevant activities.

In addition, in December 2012, Sudan’s President Omar Al-Basher issued a decree establishing a committee that would review the conditions under which humanitarian organizations were working in the country. UNAMID and humanitarian partners were nevertheless awaiting improvements in the humanitarian access on the ground, Mr. Mulet said.

He also expressed serious concern over the increase in hostilities between the Government and some armed movements, as well as by rising inter-communal violence taking place in some parts of Darfur.

Among a spate of recent military clashes, he described an ambush of Government forces carried out by an a faction of the Sudanese Liberation Army, followed by fighting throughout early January, near the area of Guldo, that included bombing by Sudanese Army aircraft, according to local sources.

Inter-communal violence had also flared in early January when the Beni Hussein tribe and the Aballa camel-herding tribes had clashed in Jebel Amer, in North Darfur state, over access to a gold mine, resulting in scores of deaths and tens of thousands of displacements.

Security in other areas had deteriorated since his last briefing to the Council as well, Mr. Mulet noted. In that light, UNAMID, in an effort reinforce its civilian protection measures in those areas, had strengthened its early warning and rapid response capacities. 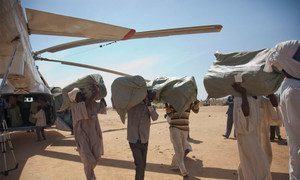 The United Nations-African Union peacekeeping mission in Darfur (UNAMID) today reaffirmed its readiness to assist all parties, following yesterday’s announcement by the Sudanese Government and one of the rebel groups of their resumed talks to end the conflict in the region.