24 January 2013
Calling on the Government and opposition groups in the Central African Republic (CAR) to abide by a ceasefire and other agreements that halted a rebel advance on the capital, the Security Council this morning extended the mandate of the United Nations peacebuilding office in the country until 31 January 2014.

Calling on the Government and opposition groups in the Central African Republic (CAR) to abide by a ceasefire and other agreements that halted a rebel advance on the capital, the Security Council this morning extended the mandate of the United Nations peacebuilding office in the country until 31 January 2014.

Through resolution 2088, adopted unanimously, the Council tasked the UN Integrated Peacebuilding Office in the CAR (BINUCA), to work with all parties to facilitate the full implementation of the agreements – signed in the Gabonese capital of Libreville on 11 January – as part of its mandate to help consolidate peace in the long-troubled CAR, including support for security reform and reintegration of ex-combatants.

In December, following attacks on several towns in the country’s north-east, an alliance of rebel groups – known, collectively, as ‘Séléka’ – had taken major towns on the way to the capital, Bangui, before agreeing to start peace talks under the auspices of the regional group known as the Economic Community of Central African States (ECCAS).

The resulting agreements included a ceasefire, statement of principles and a political pact that defines power-sharing arrangements and a period of political transition for the CAR.

In today’s resolution, in that context, the Council welcomed the appointment of a representative of the opposition as the Prime Minister for a Government of National Unity.

Expressing strong concern over security in the CAR, which it said remained “precarious,” the Council also welcomed the continued efforts of the ECCAS-led mission in the country, known as MICOPAX, calling on countries and all organizations in the region to help maintain stability in the area in cooperation with the CAR Government.

Through the resolution, the Council underlined the Government’s responsibilities to maintain law and order, ensure respect for freedom of expression and other human rights, reform its security sector, and stressed the importance of bi-lateral assistance in those areas.

It also strongly condemned continued recruitment and use of children in armed groups, killing and maiming of civilians, rape and sexual slavery and other forms of sexual and gender-based violence and abductions, and targeting of ethnic minorities perpetrated by armed groups, pointing, in particular to the continued threat of the notorious Lord’s Resistance Army (LRA).

Addressing journalists at UN Headquarters in New York via video-link from Bangui, the Secretary-General’s Special Representative and head of BINUCA, Margaret Vogt, welcomed the fact that the resolution stressed the need to have her office provide support for the implementation of the Libreville agreement.

She also praised “the speed at which regional countries deployed troops to Bangui” to help stabilize the situation, and noted that the creation of a follow-up committee for the agreement is now in progress, but there are difficulties in making pact hold in the field, where violent incidents continue to occur.

It was now critical to educate cadres throughout the country on the provisions of the agreement and to start disarmament and re-integration programmes in earnest, by overcoming obstacles that stalled them in the past year, as well as making progress in political and security-sector reform, Ms. Vogt said.

“Of course all of this depends on availability of funds,” she added. “The international community now needs to engage more forcefully, both diplomatically and financially, to pull the CAR from the brink.” 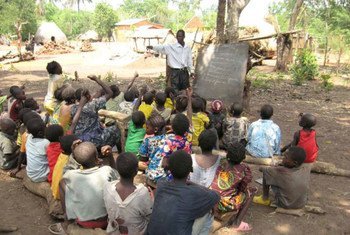 15 January 2013
Welcoming the signing of a ceasefire and other agreements that halted a rebel advance on the capital of the Central African Republic (CAR), Secretary-General Ban Ki-moon today called for all parties in the country to fulfil their commitments, with international assistance.