At opening of disarmament forum, Ban urges end to stalemate and resumption of talks

As the 2013 session of the world’s sole multilateral forum for disarmament negotiations opened in Geneva today, United Nations Secretary-General Ban Ki-moon urged the body, which has failed to agree on its work programme for the past several years, to revive substantive talks without delay.

“The world today remains over-armed. Peace is under-funded. We cannot afford to lose yet another year,” Mr. Ban said in a message delivered on his behalf to the UN Conference on Disarmament.

“It is essential to end this continued stalemate to avoid jeopardizing the credibility of the Conference and the machinery of disarmament,” he said, stressing that the items on its agenda, which focus mainly on weapons of mass destruction, transcend the narrow national interests of any one State and have significant implications for international peace and security.

Established in 1979 and with a current membership of 65 countries, the Conference has produced landmark disarmament instruments such as the Treaty on the Non-Proliferation of Nuclear Weapons (NPT), the Chemical Weapons Convention and the Comprehensive Nuclear-Test-Ban Treaty (CTBT).

However, it has been plagued in recent years by an inability to overcome differences among its members and start its substantive work towards advancing those goals.

“Strengthening the rule of law in global disarmament needs a single multilateral negotiating forum,” Mr. Ban said in his message. “I remain committed to the Conference on Disarmament, but it must fulfil its role.”

For that purpose, he urged the Conference to build on positive developments of recent years, including the action plan resulting from the 2010 review conference of the NPT, which garnered strong international support. He also strongly encouraged the Conference to engage more closely with civil society, noting that there is strong support for nuclear disarmament among this sector.

Meanwhile, he noted that last year, the 67th Session of the General Assembly agreed to establish an open-ended working group to examine ways of taking forward multilateral nuclear disarmament negotiations.

It also established a group of governmental experts that will begin work in 2014 to make recommendations that could contribute to an eventual fissile material cut-off treaty, consideration of which had been stalled, in the Conference, by the current deadlock.

“Although these processes will take place outside the Conference on Disarmament, they constitute a new impetus that I hope will facilitate your agreement on a viable programme of work,” the Secretary-General said. “We need flexibility and a spirit of compromise.”

Affirming that the Conference still has the potential to play the central role in disarmament negotiations, he called on delegations to “let us ensure it lives up to its responsibility.”

This year can be ‘historic’ for progress on disarmament – Secretary-General 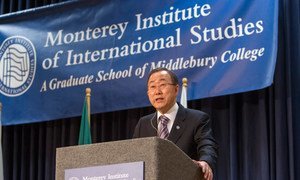 World can no longer procrastinate on disarmament issues – Ban

Secretary-General Ban Ki-moon today issued a passionate call to countries to advance disarmament and non-proliferation of nuclear, biological and chemical weapons, as well as illegal arms, stressing that Member States should not delay on this issue.