FAO
One-third of all food produced worldwide is lost or wasted.
22 January 2013

Consumers, food retailers and governments can take simple actions to dramatically reduce some 1.3 billion tons of food waste every year, according to a new campaign launched today by the United Nations and its partners.

Consumers, food retailers and governments can take simple actions to dramatically reduce some 1.3 billion tons of food waste every year, according to a new campaign launched today by the United Nations and its partners.

Launched by the UN Environment Programme (UNEP), the UN Food and Agriculture Organization (FAO) and partners, the campaign – ‘Think, Eat, Save. Reduce Your Foodprint’ – seeks to accelerate action to eliminate wasteful practices and help countries share successful initiatives on these issues. It specifically targets food wasted by consumers, retailers and the hospitality industry.

“In a world of seven billion people, set to grow to nine billion by 2050, wasting food makes no sense – economically, environmentally and ethically,” said UNEP’s Executive Director, Achim Steiner. “To bring about the vision of a truly sustainable world, we need a transformation in the way we produce and consume our natural resources.”

About one-third of all food produced globally, worth around $1 trillion, gets lost or wasted in food production and consumption systems, according to FAO. Food loss occurs mostly at the production stages – harvesting, processing and distribution – while food waste typically takes place at the retailer and consumer end of the food supply chain.

Roughly 95 per cent of food loss and waste in developing countries are due to unintentional losses at early stages of the food supply chain as a result of limitations in harvesting techniques, storage, packaging and marketing systems.

In the developed world, however, food waste occurs because consumers are quick to throw away food due to over-buying, inappropriate storage, and preparing meals that are too large, while food manufacturers are retailers produce waste because of inefficient practices, confusion over date labels and quality standards that overemphasize appearance.

“In industrialized regions, almost half of the total food squandered, around 300 million tons annually, occurs because producers, retailers and consumers discard food that is still fit for consumption,” said FAO’s Director-General, José Graziano da Silva. “This is more than the total net food production of Sub-Saharan Africa, and would be sufficient to feed the estimated 870 million people hungry in the world.”

In Europe and North America, the average waste per consumer is between 95 and 115 kilograms per year, while consumers in sub-Saharan Africa, south and Southeast Asia each throw away only six to 11 kilograms annually.

“If we can help food producers to reduce losses through better harvesting, processing, storage, transport and marketing methods, and combine this with profound and lasting changes in the way people consume food, then we can have a healthier and hunger-free world,” Mr. da Silva added.

The campaign will seek to involve families, supermarkets, hotel chains, schools, sports and social clubs, the private sector, city mayors and world leaders to reach its food potential. It will also provide simple tips in its website that will allow users to make food waste pledges, and a platform for those running campaigns to exchange ideas and create a global culture of sustainable consumption of food. 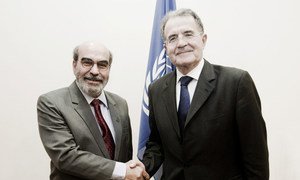 Food insecurity in Africa’s volatile Sahel region is closely linked to peace and stability there, the head of the United Nations Food and Agriculture Organization (FAO) warned today, adding that short-term humanitarian efforts in the Sahel needed to be replaced with longer-term development.