UNHCR/Tin Htun Myint Zin
In a camp for internally displaced people in Kachin state, Myanmar, a family of five meets with a UNHCR staff.
20 January 2013

United Nations Secretary-General Ban Ki-moon has welcomed the Government of Myanmar's recent announcement of a cease-fire in its northern state of Kachin and has been following the various reports from the ground on its implementation, the spokesperson for the world body's chief said today.

“He calls upon both sides to make serious effort to create conditions for sustained peace in Kachin through enhanced confidence building measures and political dialogue,” Mr. Ban's spokesperson added in a statement on Sunday.

“He also calls for renewed access to vulnerable civilian populations in the area to enable the supply of humanitarian assistance to them,” the spokesperson continued.

The authorities in Myanmar reportedly announced a unilateral cease-fire on Friday following a three-week offensive against ethnic Kachin rebel fighters. Some 75,000 people have fled their homes in Kachin since fighting began in June 2011 between Government troops and rebels.

Last Thursday, in the wake of a four-day visit to the country, the Secretary-General's Special Adviser on Myanmar, Vijay Nambiar, called on all parties in the country to work to ease tensions, resume dialogue, and ensure that there is humanitarian access to those who have been affected by the violence in Kachin state.

Regarding the resumption of dialogue in Kachin, the envoy stressed in his meetings with Government officials that while the matter was for the parties to negotiate among themselves, the United Nations has an interest in seeing that the continued stalemate and escalated tensions do not “undermine the overall direction of reform and transformation in the country or adversely affect the positive international atmosphere that had been generated so far.”

Mr. Nambiar also reaffirmed the UN's commitment to support Myanmar and appealed for greater humanitarian access in the region for UN agencies and other humanitarian partners.

During her visit to Myanmar in December last year, the UN Under-Secretary-General for Humanitarian Affairs, Valerie Amos, discussed with President Thein Sein her concern about the lack of humanitarian access in parts of Kachin, particularly with the onset of winter. 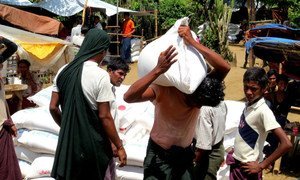 Following visit to Myanmar, UN envoy calls on all parties to resume dialogue

The United Nations envoy to Myanmar today called on all parties in the country to work to ease tensions, resume dialogue, and ensure that there is humanitarian access to those who have been affected by the violence in the states of Kachin and Rakhine.