IRIN/Kenneth Odiwuor
The use of mercury to extract gold poses health risks to artisanal miners.
19 January 2013

Over 140 governments meeting at a United Nations forum in Geneva have agreed to a global, legally-binding treaty to address mercury, a notorious heavy metal with significant health and environmental effects.

The Minamata Convention on Mercury – named after a city in Japan where serious health damage occurred as a result of mercury pollution in the mid-20th Century – provides controls and reductions across a range of products, processes and industries where mercury is used, released or emitted.

These range from medical equipment such as thermometers and energy-saving light bulbs to the mining, cement and coal-fired power sectors, according to a news release issued today by the UN Environment Programme (UNEP), which convened the negotiations.

“After complex and often all-night sessions here in Geneva, nations have today laid the foundations for a global response to a pollutant whose notoriety has been recognized for well over a century,” said UNEP Executive Director Achim Steiner.

“Everyone in the world stands to benefit from the decisions taken this week in Geneva, in particular the workers and families of small-scale gold miners, the peoples of the Arctic and this generation of mothers and babies and the generations to come. I look forward to swift ratification of the Minamata Convention so that it comes into force as soon as possible,” he added.

The treaty, which has been four years in negotiation and which will be open for signature at a special meeting in Japan in October, also addresses the direct mining of mercury, export and import of the metal and safe storage of waste mercury.

UNEP noted that mercury and its various compounds have a range of serious health impacts, including brain and neurological damage especially among the young. Others include kidney damage and damage to the digestive system. Victims can suffer memory loss and language impairment alongside many other well documented problems.

Among the provisions of the treaty, governments have agreed on a range of mercury-containing products whose production, export and import will be banned by 2020. These include batteries, except for 'button cell' batteries used in implantable medical devices; switches and relays; certain types of compact fluorescent lamps (CFLs); mercury in cold cathode fluorescent lamps and external electrode fluorescent lamps; and soaps and cosmetics.

Certain kinds of non-electronic medical devices such as thermometers and blood pressure devices are also included for phase-out by 2020.

Governments also approved exceptions for some large measuring devices where currently there are no mercury-free alternatives. In addition, vaccines where mercury is used as a preservative have been excluded from the treaty as have products used in religious or traditional activities.

♦ Receive daily updates directly in your inbox - Subscribe here to a topic.
♦ Download the UN News app for your iOS or Android devices.
mercury

One year on, UN expert urges ratification of treaty to phase out mercury use 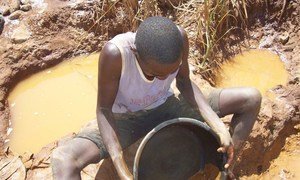 Communities in developing countries are facing increasing health and environmental risks linked to exposure to mercury, according to new studies by the United Nations environmental agency.