Two senior United Nations officials today stressed that the continued indiscriminate violence in Syria is worsening the human rights and humanitarian situations faced by civilians as it becomes increasingly difficult for international relief organizations to reach them.

Under-Secretary-General for Humanitarian Affairs and Emergency Relief Coordinator Valerie Amos said she was particularly concerned by the “vicious indiscriminate nature of the violence that is taking place and the increasing levels of sexual violence, which is affecting many women.”

Harsh winter conditions are also adversely affecting thousands of people who are living in tents without access to food, medical equipment or services, she told reporters at UN Headquarters in New York.

According to UN estimates, there are 4 million people in the country in need assistance, half of whom have been displaced internally. In addition, there are 650,000 displaced people displaced in neighbouring countries, in North Africa and in Europe.

Ms. Amos, who briefed the Security Council in a closed-door session on the humanitarian situation in Syria, noted that one of the major challenges for UN agencies has been obtaining access to those who are most in need.

“Our response efforts continue to improve but I have briefed the Council that there are still millions of people we are not able to reach,” she said, adding limited funding has also affected humanitarian operations.

The World Food Programme (WFP) for example, managed to reach 1.2 million people in December but had to cut the rations because of a lack of funds.

“We urgently need funds and we urgently need to increase our capacity which is why I’ve asked the Syrian authorities to think about a number of international organizations that can help us with that effort,” she said.

During her briefing, Ms. Amos appealed to Council members with influence with the Syrian authorities as well as with the opposition to make it clear that UN humanitarian efforts are independent and impartial of any kind of political discussion.

“The situation on the ground is difficult, it’s volatile. We will continue to engage with the opposition and the Government on access but I would like the Security Council members to also do the same,” she said.

The UN High Commissioner for Human Rights, Navi Pillay, who also briefed the Council, said she was deeply concerned by the number of deaths, which have now reached at least 60,000, and the number of human rights violations committed by both Government and opposition forces.

“The figures speak for themselves. Sixty thousand is not a figure that should be treated lightly,” Ms. Pillay told reporters. “Like victims who are suffering, I’m deeply concerned that there has been no concrete action to address the situation.”

Ms. Pillay said the monthly death rate had also increased since she last briefed the Council in August 2011, from 1,000 to 5,000 deaths, and that the conflict had dramatically changed in nature since it began.

“At that time, it was State security forces acting against peaceful protestors,” said Ms. Pillay, who has repeatedly urged the Council to refer the situation in Syria to the International Criminal Court (ICC) for investigation of war crimes and crimes against humanity. 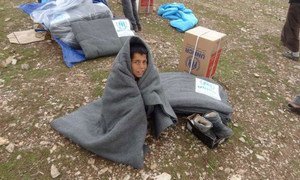 The United Nations refugee agency today said it implementing measures to help more than 600,000 displaced Syrians weather harsh winter conditions, while warning that the number of people fleeing the violence in the Middle Eastern country continues to grow.