Haiti: top UN official calls for delayed elections to be held within the year

The top United Nations official in Haiti today called on the Government of the beleaguered Caribbean country to carry out free and fair elections, which have been delayed for over a year, as soon as possible within 2013.

Mariano Fernandez Amunátegui, Special Representative of Secretary-General Ban Ki-moon for Haiti, welcomed, in that context, work begun by the country’s President and the President of the National Assembly to organize local, municipal and mid-term legislative elections by the end of the year.

“We hope that the three branches of the State power work together diligently toward that goal,” he said in a statement released by the UN Stabilization Mission in Haiti, or MINUSTAH, which Mr. Fernandez heads.

According to that release, the most urgent task now is to put in place an Electoral Council.

In that context, he said that a 25 December agreement between the executive and legislative branches, on the formation of a Transitional College of the Permanent Electoral Council was an important first step and he urged its work be carried out without delay, in an independent and transparent manner.

The Special Representative reiterated that MINUSTAH and the international community are ready to support the organization of inclusive elections in Haiti. 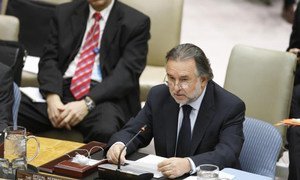 Haiti must focus on strengthening its rule of law institutions, including its national police and electoral council, to consolidate the gains it has achieved in recent years, the United Nations Security Council heard today as it reviewed developments in the Caribbean country.