The ongoing crisis in Mali has led to serious human rights violations, including extrajudicial killings, rape and torture, says a United Nations report released today, which warns that increasing ethnic tensions could have alarming consequences on the North African nation.

The report, released by the Office of the UN High Commissioner for Human Rights (OHCHR), was compiled by a mission deployed to Mali and its neighbouring countries in November, and details how rights violations have been taking place since January 2012, when fighting between Government forces and Tuareg rebels broke out in the country’s north, later resulting in radical Islamists seizing control of the area.

The report shows that the current human rights situation is linked to longstanding and unresolved issues, and that human rights violations have been committed both in the North, and in the area under Government control.

Members of the National Movement for the Liberation of Azawad allegedly used students as human shields to force military forces to surrender and later executed 94 of the 153 captured soldiers. Several Tuareg soldiers were also victims of reprisals by members of the Malian army in the North, who reportedly killed nine soldiers in Timbuktu in February.

The report stresses that women in particular have suffered degrading treatment by extremist groups based on an extreme interpretation of Sharia law. They have suffered from harassment, abuses and sexual violence due to accusations of being improperly veiled or dressed, or for riding a motorbike.

“Rapes of women and girls, at times in front of family members and often apparently carried out on an ethnic basis, have been repeatedly used in the North to intimidate people and break any form of resistance, in a culture where rape is considered as taboo and victims often suffer from social exclusion,” OHCHR spokesperson Rupert Colville told reporters in Geneva, adding that girls as young as 12 or 13 have been forcibly married to radical Islamists and sexually abused.

Other reported human rights violations described in the report include amputations, arbitrary detentions, torture, forced disappearances and the recruitment of child soldiers.

The OHCHR mission highlighted the increasing presence of self-defence militia and expressed alarm at the growing ethnic tensions in Mali, which could also lead to possible acts of revenge against the Tuareg and Arab communities perceived as being linked to the armed groups.

OHCHR called on all parties “to abide by international human rights and humanitarian law standards,” and welcomed the announcement on Wednesday by the Prosecutor of the International Criminal Court (ICC) that she has opened an investigation into the situation in Mali.

“We also call for the initiation of a reconciliation process to address current human rights challenges as well as long-standing unresolved issues, and urge the Malian army and its supporters to take extreme care not to carry out further reprisals as and when they retake territory in the North,” he added, reiterating OHCHR’s readiness to assist the Government by supporting the establishment of a transitional justice mechanism to facilitate national reconciliation.

The clashes in the North, as well as the proliferation of armed groups in the region, drought and political instability have uprooted hundreds of thousands of civilians over the course of 2012.

During the same briefing in Geneva, the UN High Commissioner for Refugees (UNHCR) announced that it is reinforcing its resources in the country in anticipation of further new displacement.

UNHCR spokesperson Melissa Fleming said the agency is estimating there will be an additional displacement of 300,000 inside Mali, while a further 407,000 Malians will flee to neighbouring Burkina Faso, Niger and Mauritania.

“In Burkina Faso, we have sent staff from Ouagadougou to monitor the border and to boost assistance in the refugee camps in Burkina’s Sahel administrative region,” Ms. Fleming said.

“The refugees said they fled the recent military intervention, the lack of any means of subsistence, and fear of the strict application of Sharia law. They reported having witnessed executions and amputations, and mentioned that large amounts of money are being offered to civilians to fight against the Malian army and its supporters.”

In Niger, UNHCR continues to provide help to the 52,875 refugees in camps and sites in Mangaize, Banibangou, Ayorou, Abala and Tillia areas.

Meanwhile, the World Food Programme (WFP) said that its presence had been reduced to a minimum in northern Mali due to violence and the limited humanitarian presence, but that it would resume its food distribution as soon as the situation allows it and would continue to explore ways to deliver assistance.

In the meantime, the agency continues to distribute food assistance to internally displaced persons in Bamako, the Malian capital, where it is assisting a total of 12,000 persons in cooperation with its partners. 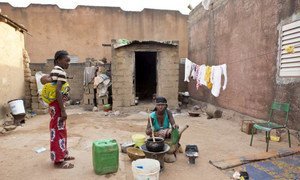 The latest round of military clashes over the weekend between the Malian army and radical Islamist groups have sparked a new wave of displacement and led to a worsening of the humanitarian situation in the North African country, the United Nations warned today.