The United Nations University (UNU), the international organization’s research and teaching network, has been ranked fifth among government-affiliated think tanks in a report launched at the world body’s headquarters in New York today.

The academic body, which includes 15 institutes and programmes in 13 countries worldwide, was also ranked sixth among international development think tanks in the report – the 2012 Global Go-To Think Tank Index – compiled annually at the University of Pennsylvania.

According to James G. McGann, the director of the project, the importance of the report “lies in its ability to highlight the important contributions that think tanks make to governments and civil societies around the world.”

The report is compiled through a three-stage process of international peer and expert reviews by policymakers, journalists, government officials, donors, think tank executives and scholars from over 120 countries.

It identifies influential organizations from over 180 countries worldwide, and classifies them according to various criteria, including geographic location, affiliation, focus and longevity of operations. The Brookings Institution of Washington, D.C., in the United States, was named top overall think tank in the world.

Established by the General Assembly in 1973 and headquartered in Tokyo, the UNU has administrative and service units in Bonn, Kuala Lumpur, New York and Paris.

♦ Receive daily updates directly in your inbox - Subscribe here to a topic.
♦ Download the UN News app for your iOS or Android devices.
unu 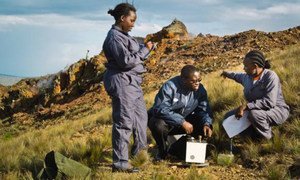 Secretary-General Ban Ki-moon has appointed David M. Malone of Canada as Rector of the United Nations University (UNU) in Tokyo, following consultations with the Director-General of the UN Educational, Scientific and Cultural Organization (UNESCO), Irina Bokova.