The head of the United Nations Educational, Scientific and Cultural Organization (UNESCO) has condemned the recent desecration and arson attack against a mausoleum in Tunisia devoted to the Sufi saint Sidi Bou Said.

The attack against the Sidi Bou Said mausoleum, located in the village bearing the same name, took place during the night of 12 January, the Paris-based UNESCO said in a news release.

“The torching of this symbolic 13th century site, that gave rise to the village of Sidi Bou Said, marks yet another step in the campaign of destruction against Tunisia’s cultural heritage and history,” the agency’s Director-General, Irina Bokova, said.

“This tragic act not only strikes at the spiritual and historical heritage of Tunisia, but also at Tunisian society’s values of tolerance and respect for different beliefs and cultural diversity,” she added.

Ms. Bokova called on Tunisian authorities to take urgent measures to protect all sites representative of the cultural and historic wealth of the country, and stressed the importance of coordinating such action with civil society organizations to ensure its protection for and by future generations.

She also said that UNESCO remained ready to provide any necessary assistance for the rehabilitation and restoration of damaged sites.

The UN agency seeks to encourage the identification, protection and preservation of cultural and natural heritage around the world considered to be of outstanding value to humanity. This is embodied in an international treaty called the Convention concerning the Protection of the World Cultural and Natural Heritage, adopted by UNESCO in 1972.

♦ Receive daily updates directly in your inbox - Subscribe here to a topic.
♦ Download the UN News app for your iOS or Android devices.
cultural heritage

Titanic wreckage to be protected under UNESCO convention 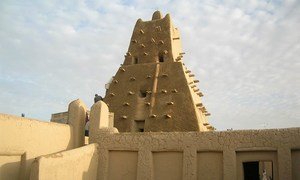 The head of the United Nations Educational, Scientific and Cultural Organization (UNESCO) has called on the international community to act urgently to protect Mali's cultural heritage after the latest wave of destruction at Timbuktu.