“2013 will be a critical year for Côte d’Ivoire,” the Secretary-General’s Special Representative for the West African country, Bert Koenders, told a Security Council meeting on the matter.

“In the context of a volatile regional security situation, the stability and economic success of Côte d’Ivoire is more than ever important to the stability of West Africa,” he added, noting that the UN Operation in Côte d’Ivoire (UNOCI) – which he also heads – had recently increased preparedness on the country’s northern border with Mali, which has been dealing with the impact of the loss of control over much of its north, following the activities of radical Islamists there.

Noting impressive economic and political progress in the country, Mr. Koenders urged continued support from the Council “to consolidate the significant gains achieved and address remaining challenges and root causes of the repeated crises which have engulfed the country on so many occasions over the past decades.”

Those challenges, he said, included such potential triggers of violence as land tenure and identity issues, as well as matters related to governance, justice and human rights.

The UN official also called for crucial investments in employment and basic social services, notably health and education in vulnerable areas, as well as a sustained focus on fighting corruption and support to dialogue, reconciliation and upcoming local elections.

UNOCI has been supporting the reunification and stabilization of the West African country, split by civil war in 2002. A 2010 presidential election, meant to be a culminating point in the peace process, resulted in months of violence when former President Laurent Gbagbo refusal to step down after losing to Alassane Ouattara, who finally took office in May 2011.

Last year saw a resurgence of violence over several months, with a spate of attacks targeting national security forces in and around Abidjan and along the borders with Ghana and Liberia, which, Mr. Koenders said, had the aim of destabilizing President Ouattara’s Government.

The Government, he said, had responded to those attacks as well as to other insecurity in the west of the country, including armed robbery and weapons trafficking, through joint operations with Liberia.

In addition, UNOCI increased its military presence in the border areas, and boosted inter-mission cooperation with another peacekeeping operation, the UN Mission in Liberia (UNMIL), notably through the transfer of helicopters and enhanced information-sharing.

The attacks, however, also showed the need to prioritize security-sector reform and reintegration of ex-combatants, including support to police and the judicial system to investigate incidents professionally and rapidly, he said.

Justice sector reforms, he continued, also should be enhanced to combat impunity for sexual crimes and other gross violations of human rights in a sustainable way and to improve access to equitable justice. 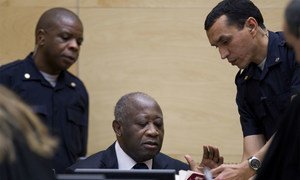 Appeals judges at the International Criminal Court (ICC) today unanimously dismissed an argument on its jurisdiction presented by defence lawyers for former Ivorian president Laurent Gbagbo, who is currently facing trial there on charges of crimes against humanity.