A United Nations independent expert today called on the European Parliament to take into account development concerns when they vote on amendments to the region’s Common Agricultural Policy (CAP) next week, stressing this is the last chance to ensure this legislation takes into account the human right to food.

“Reform of the Common Agricultural Policy means high stakes not only for European farmers, but for millions of others worldwide who are affected by EU policies,” said the Special Rapporteur on the right to food, Olivier De Schutter. “Development concerns should be made an essential part of CAP reform, and the window of opportunity for doing so is rapidly closing.”

According to its website, CAP aims to enable farmers to produce sufficient quantities of safe, high-quality food, ensure economic development in rural areas and meet environmental and animal welfare standards.

In June 2012, members of the European Parliament (MEPs) in the development committee voted unanimously in favour of monitoring and taking into account the CAP’s impact on development, according to a news release from the Office of the UN High Commissioner for Human Rights (OHCHR). However, their views were not included in amendments drawn up in the agriculture committee in December, and will now be voted on as individual amendments in next week’s vote.

“MEPs must not squander the opportunity they now have to bring the proposals into line with the requirements of the human right to food and the EU’s development promises,” Mr. De Schutter said.

“In order for the CAP to work for farmers inside and outside the EU, we must undertake detailed monitoring of the impacts of EU farm exports and imports on developing countries, consult developing world farmer organizations, and conduct a proper assessment of the impacts on the right to food,” he added.

Mr. De Schutter recalled article 21 of the EU Treaty, which requires that its actions be guided, among other things, by human rights. He also cited the EU Policy Coherence for Development launched in 2005, which aims to ensure that all EU policy areas with an external impact be designed to support and not contradict the fight against poverty and the achievement of the set of anti-poverty targets known as the Millennium Development Goals (MDGs).

In addition, he called on MEPs to ensure mandatory crop rotation and support for leguminous protein crops to protect the environment.

“The EU’s massive dependency on soya and maize imports to feed European livestock drives habitat destruction, natural resource depletion and unsustainable production patterns in the developing world that benefit large corporations rather than poor farmers,” he said. “The reformed CAP must encourage EU farmers to diversify and grow crops for local use within agroecological systems.” 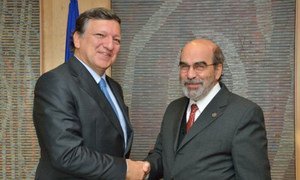 The European Union (EU), already the largest single source of voluntary funding to the United Nations food agency, today pledged to scale up its aid to the world body in efforts to fight malnutrition, which kills 2.5 million children annually and afflicts 870 million people overall.