15 January 2013
The head of the United Nations food relief agency today expressed her gratitude to the people and Government of Turkey for their support of Syrians seeking refuge from the continuing violence affecting their country.

“It’s because of the compassionate response of the Turkish people and World Food Programme’s (WFP) strong partnership with the Government of Turkey that we have been able to rise to the challenge of assisting so many Syrians in need of food assistance during this ongoing humanitarian crisis,” said WFP’s Executive Director, Ertharin Cousin, in a news release.

Her comments came at the end of a three-day trip to the country during which she met with Turkish officials in Ankara and Istanbul followed by a visit to the Kilis refugee camp – the first of its kind in the country – situated along the Turkish-Syrian border.

Accompanied by the Turkish Minister of Economy and other high-level government officials, Ms. Cousin met with Syrian refugees in Kilis, listening to their accounts of the deteriorating humanitarian situation in Syria that forced them to flee.

According to a recent update released by the UN High Commission for Refugees (UNHCR), the past two weeks have seen 3,266 Syrians admitted to Turkey from the borders as the Syrian conflict has continued to escalate. Now in its 23rd month, the violence has claimed more than 60,000 lives, mostly civilian, while hundreds of thousands of Syrians have been displaced.

“These families have gone through very difficult moments, losing their loved ones and worrying about the people and homes they left behind,” Ms. Cousin said.

“We have a commitment to continue to support Syrian refugees – whether in Turkey or in the other neighbouring countries – with some of them in very precarious conditions this winter,” she added, referring to the harsh weather conditions which have further exacerbated the living conditions for refugees in the region.

During her visit, the WFP chief also stopped at one of the camp’s supermarkets and met women using their WFP-sponsored electronic food cards to purchase fresh food for their families.

The voucher system – which the UN agency plans to expand to assist a further 100,000 Syrian refugees in Turkey by June 2013 – allows refugees to shop for the food they want and prepare it to their liking.

In addition to Turkey, Syrians are also taking refuge in Jordan, Iraq, Lebanon and Egypt. The UN estimates that up to a million Syrian refugees will need help during the first half of 2013. 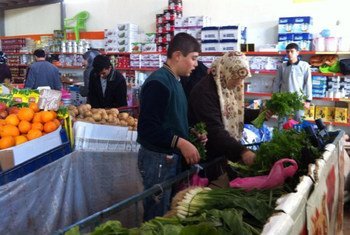 14 January 2013
The total number of Syrians seeking refuge in camps in Turkey from the ever-worsening violence of their country’s civil war has risen to over 153,300 persons, the United Nations refugee agency reported today.